Film: 'What We Did On Our Holiday' 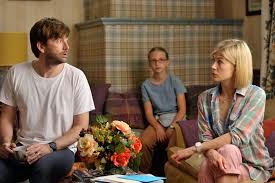 I'd feared that I'd be disliking this film. It had all the 'right' ingredients for that result. And thus it turned out to prove.

The title has a certain resonance with the slasher-horror series 'I Know What You Did Last Summer', but dismiss that from your minds.

The first half of this film is played as broad comedy, during which it didn't raise even the ghost of a smile from me. Then an event happens which lurches it into a different world, veering uneasily between black comedy and farce - and which gave me two occasions for half-smiles at the most. It ends with thickly laid-on sentiment to make one wince and double-wince. Oh dear!

I went because it's co-scripted and co-directed by Andy Hamilton, whom I like (with Guy Jenkin). Hamilton is a prolific comedy writer for radio, as well as being a regular panelist on light-hearted quiz shows for both radio and TV. So I thought it might be a cut above the usual. Sadly, not so.

David Tennant (one of the recent incarnations of Doctor Who, as well as having played the finest 'Hamlet' I've seen for decades - there was a television version of the RSC production a few years ago) plays the father of a three-child family. His wife, Rosamund Pike, I'll be seeing again shortly in 'Gone Girl'.
The five of them drive from London to Scotland for the 75th birthday celebrations of Tennant's father, Billy Connolly, who's suffering from terminal cancer and who is bravely trying to keep his suffering hidden from others. When they arrive at Tennant's wealthy brother's (Ben Miller) palatial house where all are to meet, naturally Connolly gravitates towards the children, wisecracking with them and taking them on an excursion to the beach while the many dozens of guests arrive to participate in the elaborate celebrations - several marquees, Scottish band, a veritable banquet prepared.
Not only is Connolly trying to hide his true condition from everyone, Tennant and Pike have to keep up the pretence of a happy marriage when they're actually on the edge of divorce, bickering like anything when they're alone.

There's an added poignancy to Connolly's role in that only a few weeks ago it was revealed that in real life he is not only suffering from prostate cancer, but the onset of Partkinson's has also been diagnosed.

The children aged (I'm guessing) around 11, 7 and 4, were particularly irksome, the two youngest most of all. Why did they give the youngest so many lines when at least three quarters of what she said was lost to me in infant burbling? I suppose what we're supposed to think is "Aw, so sweet!"

I was shifting in my seat all through this film and looked at my watch more than a few times. If you're one of those who doesn't have my resistance to being manipulated and carried along, suspending your critical faculties, then I can well understand how you may well like it - and I wouldn't dare to venture that that view is any less valid than mine. But, for my own terms on what constitutes a film that entertains me, I must give this a lowly......................2.5/10