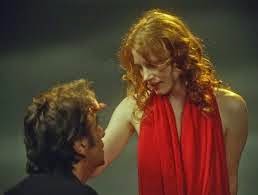 My belated first experience of one of these live relays into a cinema from, well, not a theatre in this case, but a live Q & A session from the National Film Theatre on London's South Bank - Al Pacino and Jessica Chastain, hosted by Stephen Fry. It was preceded by two films, the first being of the Oscar Wilde play itself, and then the other, a documentary film of Mr Pacino's trials and frustrating attempts to stage the play for a run in a Los Angeles theatre while simultaneously trying to shoot the very film which we had just seen, which he did eventually succeed in doing.
The following Q & A section lasted just 40 minutes, and with there being a 10 minute interval between each of the three parts of the programme, it made for a rather long 4-hour afternoon/evening - which was actually a small price to pay for the experience (unlike the actual monetary price!).

'Salome'
For anyone who doesn't know the play it's unique among Wilde's works - a shortish one-act piece written in highly elevated, florid style (I'd forgotten that it was actually originally written in French) bursting with analogies and similes in decorative, vivid language (oft-repeated) with minimal action. The Gospel-based scene is where King Herod's (Pacino) step-daughter, Salome (Jessica Chastain) is asked to dance by Herod, in gratitude for which he'll grant her anything she wants. After dancing she demands the head of garrulous prophet and prisoner, John the Baptist (Kevin Anderson) - to the shock and horror of Herod himself who fears (celestial?) repercussions if he allows her wish.
Pacino says somewhere that he thought Wilde expected the play to be read aloud rather than acted out, and I can understand that. I know it quite well, not just from having read it several times over the years, but seen it once on stage. This was actually the same production (Steven Berkoff's 'slow-motion' take on it in the early 1990s, stretching a short play into a full evening's worth) which Pacino also saw and which made him acutely aware of the play, which has obsessed him ever since. (He actually said in the documentary that when he saw that West End production he hadn't known who'd written it until he looked at the programme when it was over, there being no interval. I find that hard to believe, but that's what he claims.)

Others might be familiar with the Richard Strauss opera (so much dissonance, even for Strauss - though not nearly so much as in 'Elektra'!) which is based on a German translation of this same Wilde text. ('The Dance of the Seven Veils' is a famous set piece sometimes played as a separate short item in an orchestral concert. Btw: In Ken Russell's cheeky and entertainingly daft throwaway,1987 film, 'Salome's Last Dance' he uses part of the Wilde text but has Salome stripping off to 'Grieg's 'In the Hall of the Mountain King'!)

The Wilde play itself is only about one hour and twenty minutes long, but it's language is exceptionally vivid, even by the author's standards, which helps to carry the story through with consummate ease. There is absolutely no need for acting histrionics as it's already in the words. Minimal physical action is to be preferred, and that's the treatment it's given here, on basically a plain stage-set with no audience. It's also in modern dress, which works fine. Theatrical conceits, where needed, should not be overplayed, and here once again they are done sparingly and intelligently.
Pacino as Herod is quite a wonder to behold, at times playing his part with a twinkle in the eye, sometimes mischievously. He runs the whole gamut of emotions - blind rage, tender beseeching, humouring, impatience, disdain, irritation - it's quite a tour de force. Herod clearly has the hots for Salome, his executed brother's daughter, much to his wife's (Salome's mother's, played well by Roxanne Hart), Herodias', displeasure. Chastain is good enough in a part with some long speeches. Kevin Anderson as Jokanaan (Hebrew for John the Baptist) is suitably fierce as the doom-foretelling prophet, resisting Salome's flesh-driven overtures.
I liked the production a lot and think it must have worked well as a piece of live theatre. It's in no way pretentious and gives due regard to the real 'star' of the piece, the language of the play itself.
I'll rate this particular film a........................7.5

'Wilde Salome' follows Pacino investigating  the background of the play, including, of course, Wilde's life, visiting key locations in Dublin, London and Paris to find out more about this writer for whom he clearly has enormous respect and admiration. He talks to Melvin Holland, Wilde's grandson, about his illustrious forefather - and there are interpolated comments from Tom Stoppard, the recently departed Gore Vidal, as well as (would you believe it?) none other than Bono himself!
This documentary features extended extracts from the film which we'd only just been watching. Although it was a pleasure to savour them again, it did get a bit tiring having to sit through them anew after only just experiencing them. I would have found it much more effective if I'd been watching it after a decent interval of several days.
There are sections of this film showing Pacino losing his cool about having such a short timetable to film the first 'Salome', while simultaneously rehearsing and putting on the stage production. There were also scenes in the middle-east desert (complete with camels) where he took the entire film crew, presumably to soak in some authentic atmosphere. I didn't quite 'get' that expensive excursion as none of that aspect is actually visibly used in the play's production.
But it  was interesting enough. I'm sure I'd have enjoyed it more if I'd seen this documentary at a separate sitting. It didn't seem to me quite as interesting as his own 'Looking for Richard' a few years back, when he was doing background work in preparation for his playing Richard III on stage.

The Q & A came over well but with no big surprises. Pacino appeared very affable, quite charming and modestly self-effacing, though I must say that poor Jessica Chastain seemed to be crowded out by Al P. and Stephen Fry, though her short career so far can hardly compare with that of either of the other two. There were maybe seven or eight questions from members of the audience at the National Film Theatre, nearly all addressed to Pacino - about his first acquaintance with the play, his continuing friendship with Berkoff, his stage acting v film acting - though in most cases the answers seemed to get lost in a detour through various anecdotes, some of which were quite entertaining. I could have done with watching a longer session were it not that I was getting anxious about returning home, very unusually in the dark, with my pussycats wondering what on earth had become of me, so it was not without some relief that it came to an end when it did. Nevertheless, a fruitful experience.
Posted by Raybeard at 14:24