Film: 'I Love You, Phillip Morris.'

Passable entertainment, though only just. Although supposedly 'based' on a true story, I found it completely unconvincing - but I don't suppose it was seriously aiming at veracity. Jim Carrey giving a relatively subdued performance, at least by his standards, and not without the occasional hint at subtlety. While knowing that a large number of viewers are getting fed-up with his manic gurning and high-powered histrionics, I am not one of those. In fact I generally find his antics highly amusing, though in this film he is largely, but not entirely, reined-in. The Ewan MacGregor character was unbelievably colourless and insipid - and I just found him irritating and wondered how anyone could fall for him. I didn't find anything really offensive in the film despite there being occasional glimpses of stereotypical ways of how some straight people see gays, though I did think it came close to the edge on a particularly sensitive topic towards the end of the film. But all-in-all, a film to see, maybe just the once. 5.5/10.
Posted by Raybeard at 00:55 5 comments:

A Fine Read - Radclyffe Hall's 'The Well of Loneliness'

I first read this truly ground-breaking novel in 1987 (at the suggestion of my most beautiful-ever gay friend. - The friendship lasting barely 6 months, breaking down after a disastrous trip to Paris together. Perhaps a story for another time?) But I'm now coming to the end of a re-read and it's striking me, much more than the first time, how remarkable the book is. It was the first novel dealing with lesbian relationships which I'd read and for that reason hadn't been immediately enthusiastic. (Silly me!) First published in 1928, it was soon involved in a notorious trial in the British courts which, unsurprisingly for the time, judged it to be 'obscene' and banned it - thus consigning it to Limbo for some decades. Of course one winces now at the writer's description of lesbians as having the 'mark of Cain', referring to gays generally as 'inverts' and homosexuality as a burden (as indeed it would have been then and in that society) and as a somewhat unwholesome characteristic, those having it being individuals to be understood with sympathy channeled through pity. But once one gets over where Hall was coming from in those repressed days it really is an extraordinary work, beautifully and sensitively written There is nothing in the least pornographic or even explicit in the book ("And that night they were not divided.") nor anything more graphic than the occasional kiss on the mouth. I wouldn't hesitate to recommend it to anyone interested in historically significant gay lit. If you are so interested, do please read - and let us know what you think.
Posted by Raybeard at 09:31 2 comments: 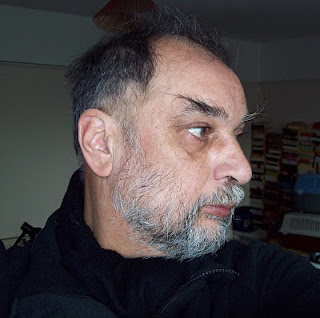 Although I see my face in the mirror several times a day it takes a mugshot to bring home how old one really looks. I made eight attempts this morning and this is the least unflattering one. It's a sobering thought knowing that one is not going to look any better in future - so that's my excuse for putting this on the record before I appear even more decrepit.
Posted by Raybeard at 08:17 6 comments: 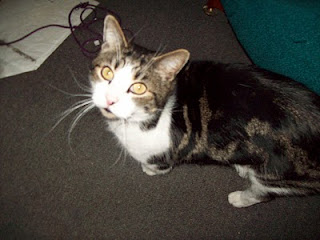 Following my last blog, here is the other half of my 'dynamic duo', the ever-wary Noodles, with his long whiskers. Rrrrrrrr.
Posted by Raybeard at 10:36 6 comments:

Here's my beloved Blackso who has come so very close to doing me a serious injury several times. Such as yesterday when he was snoozing in Noodles' own place (probably deliberately) I picked him up to place him back in his own usual 'territorial' spot on the settee. But when he's picked up awkwardly he lashes out with his long and very sharp-clawed paws at anything nearby, just to get hold of something and which, as on previous occasions, happened to be my face and neck. It was a close shave - almost literally - the resultant scratches thankfully being only superficial, but it could so easily have been disastrous - serious injury or, conceivably, even worse! Can't blame him, of course (bless his little cotton socks). It's my own forgetfulness in picking him up without forethought that creates the perilous situation. Normally, being much more affectionate than Noodles, he likes being held up to my face and he purrs loudly and rubs his head against my beard as I whisper sweet nothings to him. (He also snores like a mini-foghorn!) Noodles is much more circumspect, only getting lovey-dovey when he wants to eat and, unlike Blackso, will not stay in my lap nor sleep in my bed with me. But I do love them both like crazy. If only they didn't have those little lethal weapons in their paws they'd be....... purrfect!
Posted by Raybeard at 08:48 6 comments: