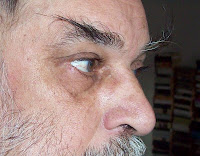 Wishing that the weather would stop shilly-shallying and really get to Spring, but it can't be far off now as my eyes have started itching, meaning  hay-fever's on its way...............Been shamefully neglectful of my doctor's advice to take regular exercise in the form of (at least) of a longish brisk walk daily to help boost body's insulin production. - No excuses.................In this Dickens anniversary year re-reading all the 14 major novels (+ the uncompleted 'Drood') and currently half-way through 'Barnaby Rudge', his fifth..................Hoping that George Osborne, our Chancellor of the Exchequer, pulls something out of the hat in Wednesday's budget for us recipients of low(est)-incomes...........Although always loved quizzes, don't like TV Quiz shows which give contestants a choice of possible answers, often just three. There's no 'skill' when chance has such a large part. You either know it or you don't!...............Why do people say "I am a Christian!" without also giving an indication of where they stand on the spectrum from 'progressive liberal' right through to 'ultra-conservative'?  It's as meaningless as saying "I'm a politician!" without further elaboration, though my own observation is that those who shout loudest about their religion also tend to be more reactionary.............I've had this computer for 6.5 years now - and it takes a maddening 30-45 minutes (sometimes longer) after switching on, for it to start up and connect. Surely there must be faster ways by now - but lack of finance prohibits..............Feeling guilty about not reading so many other blogs in last few days, and commenting on even fewer of them. But take consolation in it being a phase that most bloggers seem to go through, only to return in force after a short(?) interval.............

Will this be FOURTH time lucky?

For financial reasons I necessarily have to be selective regarding which films I go to see. I decided not to spend on this one first time round, being put off by two reviews which thought it condescending to non-white people. (I can never keep up with what is the latest p.c.-acceptable term.) Having given it a miss, I began to think I'd made a mistake when other reviews I encountered were not only more positive but even laudatory. Then came the Oscar for Viola Davis (thanks to Paul, in comment below, for correcting the name to Octavia Spencer) as' Best Supporting Actress' and by then I was really regretting my decision.
Hoping to catch it on any fortuitous special repeat showings, I first found that it was to be a single matinee playing a fortnight ago at a cinema about 20 miles away, which would have cost me (combining train fare and admission price) about £14 (Over $20 American). However, I decided to go. But, checking on the Internet the day before, I found that this showing had been completely booked out. (It was showing at a small 'art-house' cinema, seating about 80.)
Then I found there was going to be a one-off showing yesterday morning at a cinema in Brighton at one of their special weekly shows for 'Senior Citizens' (with free coffee and bickies!) at a price of just £3 (under $5) - and I could use my free bus pass to get there. Trouble was, it was also the morning of my pre-booked appointment at the podiatry clinic for my first post-diabetes assessment examining the state of my feet, which was rather too important for me to request a postponement - I'd only discovered the clash the previous day. So more frustration.
Then today I've only just found out that it's to be shown, for just one afternoon, actually at the cinema closest to me here in Worthing at the end of this month. Will anything prevent me seeing it this time? I hope not - but if this really is to be the fourth time lucky, all I can say is that it had better be good!