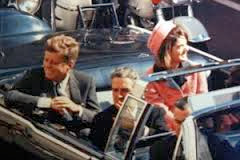 Most of those who read this blog would not yet have been born on this day - and of those who were, very few will have been old enough to remember it. So here is a little indication of how it felt to this writer.

Fifty years ago today (also a Friday) I was 17. I'd left school that Summer and was two months into my first job as trainee accountant, at that stage a mere errand-running dogsbody.

On the actual day I'd have been home about one hour, had had my dinner and, at around around 6.45 p.m., was watching TV alone, my mother being in the back living room with my grandmother.
At that time there were only two TV channels, BBC and ITV (the commercial station).
I'd have watched the national news (nothing of note that day) and was probably then watching the succeeding local news, with diminished attention.
Then the sound of my mum hurriedly coming up the hallway, calling out to me - "President Kennedy's been shot!" (She'd had the radio on in the other room. There'd been no announcement yet on TV, which was carrying on normally.) My blood froze. I can still feel it. I can't recall what I said but it was probably something like "How is he?" and she would have replied "They haven't said yet."
I felt paralysed, willing the TV to say something, - anything!  - while I was switching between the two channels.
It would have been just a couple of minutes later when, mid-programme, an announcer appeared telling us what my mum had said. He'd been shot but had survived and was being rushed to hospital.
At that time I and my whole family were devoutly religious, and I may well have got down on my knees to pray that he'd be okay.

It was a very big deal for us Catholics that JFK, being the first and so far only R.C. President, should be seen to be as successful and popular - and in our eyes up to then he had been  - while also being such a perfect family man! In fact he was head of a model, good, Catholic family. We always felt particularly proud whenever his name was mentioned, though we were also aware of his increasingly vociferous critics, which I dismissed as coming from 'sour grape Protestants'.
It hardly needs repeating here, it being so often documented, that at that time we hadn't the slightest clue about the realities of his private life, nor of the truth of his lifelong difficult medical condition. He was a hero for so many of us, the closest to a Superman that we had ever seen. He was all set to become a truly outstanding President.

Meanwhile on TV the announcer said that we'd be kept informed if there were any developments in the story, and the interrupted programmes returned. Of course my mind couldn't take in anything else on TV. I kept switching channels until - maybe something like 45 mins later, an announcer re-appeared to repeat the news when the telephone beside him rang. He picked it up....."Yes......yes......okay."  He replaced the receiver and, to the camera, "We regret to inform you that President Kennedy has died." Nothing else. The screen faded to dark. It was a hammer blow even though there was an inevitability about it.  (I was wondering why he seemed to be smiling as he made the announcement. But on reflection I don't seriously think it was a smile - more a 'pained expression', which under the pressure of the moment might have been capable of being misinterpreted.)
It was ITV who had beaten the BBC to the announcement. I switched to BBC and a good 5 minutes or more later their own regular news-reader appeared, grim-visaged, to tell us what we had already just heard.

The BBC showed their daytime test card over silence - then, all of a sudden, music, which I recognised as the opening movement of Bach's Orchestral Suite Number 3 in D, an unfortunately-chosen, gloriously jubilant sound, complete with celebratory trumpets and triumphant drums (very likely the first track on a classical music record which they happened to have on hand). ITV, after a similar few minutes silence, showed a recording of a classical concert, Sir John Barbirolli conducting Brahms' Variations on the St Anthony Chorale', a slightly less insensitive choice.
What happened then on BBC I thought was little short of a scandal. After maybe half an hour of classical music as a background to the static test-card, they returned to its normal programming schedule - and actually screened, unbelievably, two situation comedies, back to back - Harry Worth (a big-name English comedian of the time) and 'The Rag Trade' (with Miriam Karlin and Sheila Hancock), both pre-recorded with canned laughter.
I thought at the time that that was unforgivable. There was strident criticism in the papers the following day, pointing out that even Soviet Radio and TV had cancelled all their programmes in order to play solemn music for the remainder of the night.
We were later to learn that on this fateful day all the BBC big-wigs happened to be away together attending a conference on the other side of the world and had been unreachable. There'd been no one left behind in London to make a high-level decision as to what to do. I believe that because of what happened there are now contingency plans always in place to ensure that no such fiasco ever recurs.

The ensuing days are less clear to me. Masses for Kennedy's soul were being held all over the country and I attended one at my local parish church.
I remember feeling that the funeral seemed to be taking place with immoderate haste, and looked somewhat disorganised. All the major world leaders were there but I searched in vain for even just a glimpse of our then Prime Minister, Sir Alec Douglas-Home, who did actually attend but was nowhere to be seen on film. It was French President Charles De Gaulle who was pre-eminently conspicuous.

Then it was over. Johnson had been sworn in as President within minutes of Kennedy's death being announced. Shortly afterwards Oswald himself was shot. Life tried to return to something like it was before even though there was a chunk of it missing. I carried around for some time a heavy feeling of the injustice of it all. Why did God allow it to happen? (Good question!)

During the passing of the last five decades revelations have come out about the personal lives of the Kennedys which we never dreamt could be so at the time, and which was, frankly, a severe disappointment to a lot of us. Do I think that I'd have reacted differently had I known? Yes and no. There is still no doubt that whatever his many personal foibles were JFK was the most magnetic leader I've known in my lifetime. The 'electricity' poured out of him, right through the TV screen - and there's been no one who has come even near that since - maybe Obama before he started having to make disappointing compromises, and perhaps Blair at the beginning, before we realised what a hopeless let-down he would turn out to be. But Kennedy's star, to my mind, outshines them all by far. He was 'charisma' itself.
In the days following the shooting we'd heard how, in a school somewhere in the southern States, a grinning teacher had gleefully announced the assassination to the assembled pupils, and the children clapped and cheered. I'm sure it wasn't unique. But I'm also sure it wasn't typical.

Within a very few years after this event Kennedy's reputation started turning big-time sour, in fact that of all the Kennedy's. (Not helped at all later by Edward and Chappaquiddick.) When Jackie Kennedy announced her intention to marry Greek multi-millionaire magnate and divorcee, Aristototle Onassis, the Church's disapproval was unambiguous, culiminating on her wedding day itself by the Vatican denouncing her as a 'public sinner'.
Re-appraisals of JFK's political legacy came thick and fast, mainly claiming that his radical credentials had been exaggerated and that his successor, Johnson, had actually been a greater President. There is no doubt that the latter was the one who had steered civil rights legislation through to its fulfilment, though would Kennedy have managed that anyway if he had survived? His political enemies were, at the time of the assassination, flexing their muscles for a fight to the end. His sudden death put them back in the box for while.
Robert Kennedy's politics were also being called into question long before he himself was gunned down in 1968.

And yet, half a century later, 1963 was a time of 'innocence' for which I still feel nostalgic, whilst being aware that it cannot return. The world has moved on too far for it to be repeated, which is not necessarily a bad thing.

On my only visit to the USA in 1969 I managed to make a visit to Arlington cemetery to see the grave with the eternal flame (and with Bobby's then as yet unconstructed grave set off slightly to the side). I recall being close to tears standing at the stone monument with his (or, more likely, his speechwriters') most-quoted words carved into them, six years after the event - and something of that same sadness remains in me even now.

This day 50 years ago will undoubtedly stay with me for my remaining time, and its power won't diminish now. It's poignant like few other memories. It's also a beautiful memory. Nothing in world affairs has left its mark on my mind like that event - and, while naturally profoundly regretting the tragedy itself,  I value enormously the experience of having lived through that time.