Film: 'Before I Go to Sleep' 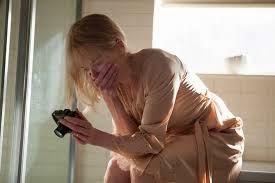 This could have been a consistently fine, nail-biting thriller. And so it was for the first hour and ten minutes. In the penultimate scene, as the revelations start coming, suspense is replaced by the expectation and portrayal of extreme physical violence which, thanks to some nifty editing, is still quite watchable even through the horror of it. Up to and including that point the film might still have held up.    However the very final scene is a catastrophic, protracted, over-sentimental, 'wrapping-up-the-loose-ends' which so debases all what's gone before as to make it risible - and, what's worse, it was so needless. As it went on and on my overall rating started to descend. I'd much rather have had questions remaining unanswered than this overblown triteness, seemingly inserted to satisfy a market that demands clear-cut answers. It's a great pity - and it's also one of the worst film endings I've seen since the hopelessly unsatisfactory conclusion of the otherwise very admirable 'The Game' (1997 Michael Douglas/Sean Penn).

Apart from a single scene featuring another character this film is an exclusively three-actor piece - Colin Firth (yes, yet again), Mark Strong and Nicole Kidman. (We already saw Kidman and Firth together only earlier this year in 'The Railway Man'). Now I'm aware that there are some people around who refuse to see any of Ms Kidman's films 'on principle', as they are to her former hubby Tom C. I'm not part of that number. Although Cruise, I think, is okay but not exceptional, I think she is the latter, and here once again she gives a high-powered and believable performance. (I didn't see the universally derided 'Grace of Monaco', though now wish I had as I'm old enough to remember all the hullabaloo surrounding Grace Kelly's giving up film-acting in order to marry Prince Rainier.)

This film's opening situation is highly intriguing (Director: Rowan Joffe):-
Somewhere in Outer London, Kidman wakes up in bed one morning with a strange man she doesn't recognise, as she also doesn't with her surroundings. When she finds the bathroom the wall is plastered with photographs of herself with explanatory labels - her own wedding (with this same 'strange' man), holidays, parties etc. Firth wakes up and, to her evident astonishment explains, as he's done every morning for years, that he is her husband and that, following an accident some years previously, whenever she sleeps her memory is wiped clean of the years since their marriage. It's a good basic idea which holds one's interest. After Firth has left for work she's rung up by her hospital psychiatrist (Strong) who, like Firth, every morning has to explain who he is and remind her to make a short selfie movie with a hidden camera on which to record who she is, and to replay it on the following morning when, after waking up, he'll have to explain it all over again. But she must not disclose to her husband this contact with him as it could be detrimental to her treatment of which he may not approve. They meet up regularly in his car, he taking care to  maintain a professional distance between the two of them. (Occasionally she has very brief mental flashbacks to a terrifying, bloody event of the past in which she was involved, but she can't quite focus on what actually happened).

The best film concerning memory loss of the last couple of decades must be Christopher Nolan's 'Memento', which I would maintain is the greatest film on that subject of which I'm aware. This film isn't in that league but it's (mostly) pretty darned good. It keeps one guessing and more than once I was wrong-footed, trying to work out what was behind the situation Kidman had found herself in. I always like to be kept on my mental toes and this did just that.

So it's a great shame about the conclusion. The film would have been far stronger without that misty-eyed epilogue, but it's there and for that reason it must be judged as an intrinsic part of this film. I would have given the film a good '7' but the the final scene is so glaringly crass that for that reason alone it slips an entire point to...............6.