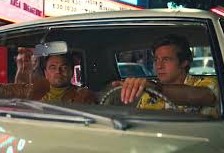 Quentin Tarantino's new film (Final one? Yet again?) was, at just 20 mins shy of three hours long, something of an endurance test for me. It wouldn't have mattered so much if the first couple of hours had been really gripping -  or even plain moderately interesting - but, apart from a very few moments of wry humour plus a little dash of violence (most of which is reserved for the final twenty minutes, and fairly graphic, as is only to be expected from Tarantino), I found it all something of a drag.
The set-up is okay, quite original as far as I know, but hardly substantial enough to sustain interest for a period of what is longer than a lot of other entire feature films.

!969, mainly in Hollywood - fading film star (Leonardo DiCaprio) whose usual screen appearances as sharp-shooter cowboy is now reduced to guest slot appearances on TV. He and his stand-in stunt double (Brad Pitt) are practically joined at the hip, mooching around, drinking their idle time away in fraternal amity (and both smoking like chimneys), living in plush Hollywood celebrity-area residences. Pitt's character lives with his dog next door to director Roman Polanski's and his wife, film star Sharon Tate's, spacious home (she played by Margot Robbie). The film starts a few months before and leads up to the time of the Charles Manson 'Helter Skelter' murders. We recall from the news at the time of a group of Manson's 'hippy' followers, high on drugs, who'd got into Polanski's house (he himself being in Europe at the time), committing several grisly murders including that of the heavily pregnant Sharon Tate. I'll say no more on that score.

Although Margot Robbie as Tate gets third place billing, she doesn't really have that much to do. Probably her longest scene is when she goes alone into a cinema to watch, with great pride and satisfaction, one of her own films, pleased at the positive response to her screen appearances by the surrounding audience.

I am a fan of Tarantino's films but I'd definitely say that this is his weakest one of all, not exactly a good one to go out on if that is what is intended. Overall, it's nowhere near as violent as his other films and though I was tensing myself up expecting to see a finale of major bloodbath dimensions when it came he didn't go quite as far over the top as I was anticipating.
A major compression of the film by reducing its playing time by one full hour would, in my opinion, not go amiss. It can take it, and there'd be the gain of taking out those many intervals of ennui. However, yet again (as you can see by ratings from other sites) my view is not widely shared, so in disagreeing with how I feel you'd be part of a majority.
Oh, and by the way, Brad Pitt's dog doesn't come to any serious harm - only some rather cruel teasing...............6.

Film: 'Blinded by the Light'

Here we have yet another in what has become a sequence of films revolving around pop music of decades past.  This time, however improbable (though based on a true story), it concerns a 16/17-year old student  (Viveik Kaira) in a Pakistani family living in Luton  (one of the large British towns with the highest proportion of Asian-origin population) in 1987 with an obsession for the songs of....... Bruce Springsteen (yes, really!)  It's based on the true life experience of Sarfraz Mansoor, who, in recent years, has become quite well known in British media circles - and whom, I do believe I very briefly encountered (amiably) in Luton in the early 90s, though he won't recall it.

Director is Gurinder Chadha who has created a notable niche for herself in British-Asian based films in the last two dozen or so years - 'Bhaji on the Beach', 'Bride and Prejudice', 'Angus, Thongs and Perfect Snogging'  - and her best known to date, 2002's likeable 'Bend it like Beckham'.

In this film, with a talent for writing articles and poems, the young aspiring writer is floating directionless under the concerned eye of his strict Muslim father (Kulvinder Ghir) who wants him to have a steady, reliable job with regular income, and with whom he lives along with his keeping-head-down mother and socially aware teenage sister, superficially conformist.  At college he meets a young Sikh (Aaron Phagura) who introduces him to the songs of Springsteen - and which brings him to a 'lightbulb' moment!
All this is set against a very evident background of Mrs Thatcher's divisive premiership in a town where, in particular, anti-Asian prejudice is rife (though basically anything non-white English) seen through racist graffiti on homes, openly hostile conduct, intimidating presence of the National Front (now morphed into the 'English Defence League') and some appalling and disgusting behaviour from the latter and their sympathisers.

The young man's epiphanous moment of awareness of Springsteen's lyrics is during the hurricane night of October 1987, when he puts on a tape he'd been given - a night when I, living in Oxford at the time and not having heard the warnings, had simply slept through those hours of the strongest and most destructive winds to hit Britain in a century!
Springsteen's lyrics (seen floating on-screen and swirling round his head, which is just as well as I found them not easy to decipher by ear alone) give him the confidence to acquire a regular girlfriend (Nell Williams) the untypical daughter of hoity-toity Tory parents.

Much of the drama of the story lies in the conflict between father and son over the latter's writing ambitions, his down-to-earth father preferring to see his son in a secure, steady-income occupation, the situation being exacerbated by the father himself being laid off with hundreds of others from the nearby car-making plant, leaving the mother as the family's sole bread-winner through her home sewing work. Of course the young man continues to aspire towards his own dreams, encouraged by his sympathetic college tutor (Hayley Atwell).

I thought the first hour of this two hour film (too long by at least 20 mins) was first-class. Then it not only sags conspicuously but gets very bleak with a drastic mood change when racial matters come right to the fore. Also I felt let down by, despite it being true story-based, how in predictably filmic style, the conflict between father and son is finally resolved by the cheesiest of developments when the father comes round to seeing his own error - something we've witnessed countless times on film before  - and in revelatory mode he turns into being proud of his son's achievements, accepting him as a talented writer. Wince-inducing stuff!

Overall I did like the film. If it hadn't been based on reality I'd have laughingly dismissed the unlikely premise of a young Pakistani kid being so influenced by Springsteen, a singer who was already considered as getting 'past it' at the time this film is set. But given how it is I must accept that this was near to what actually had happened.

I wish I could have rated this film higher but that over-extended second half did have some nasty edges to it, and that unbelievably banal ending devalued much of what had gone before. Still, by no means a bad watch........6.5.

I found this an oddity, and not a terribly satisfactory one either.
As far as I know it's virgin territory for this particular story in the cinema - the competition between Thomas A. Edison, played by Benedict Cumbersome (sorry, couldn't resist!) and one George Westinghouse (Michael Shannon) as to which of them would be the one to install a nationwide system of electric power in the U.S.A.
One particularly unsavoury feature I wasn't expecting is that an inordinate proportion of the film deals with who would design the first electric chair for capital punishment.  Eventually we see not only the first 'occupier' of that means of execution but, leading up to it, a demonstration of a horse being electrocuted.  All this was a prequel to my leaving the cinema with a nasty aftertaste lingering.   If this kind of thing simply washes over you, fine, but I was left almost wishing I hadn't seen the film.

It's an exceedingly busy feature with very few shots lasting more than, perhaps, five seconds.  If this was a technique to insure against one getting bored it didn't work in my case as, despite its visual flitting here and there like a hyper-active butterfly, it was peculiarly stodgy in a convoluted story which quickly lost me and my interest.
The rivalry between the two men is so bitter throughout that I was only surprised they didn't challenge each other to a duel.  There's also some betrayal in what passes between the respective assistants of both of them in stealing each other's secrets, all making for a thorough unpleasantness with frayed tempers on display,   Cumberbatch's Edison being the more cerebral of the two, and feeling particularly hard done by as the film progresses.  Both the latter and Shannon as Westinghouse represent two towering intellects burning up with jealousy against the other in a strangely stolid film.
As nearly all of the action takes place before widespread electricity is in use, much of it involves inadequate gas-lit scenes, not always easy to decipher.

During the film I had the leisure to ask myself what was wrong with it to explain my lack of engagement.  I thought at first that it might be the screenplay, though listening carefully, that aspect wasn't especially weak.
The photography was generally good or very good, befitting of the subject matter, with some impressive vistas now and again.
I failed to pin down the fault other than identifying the underlying repugnance I had towards certain aspects of the story which I've mentioned earlier, so my partiality may be at least some way to blame.

Director Alfonso Gomez-Rejon has made a few cinema features before but nothing to have got him especially noticed.  Maybe he was trying too hard with this one with all those tricksy visuals?  I don't know. I only throw out the thought.

I don't think it's a film to warm to.  Might be useful as an historical representation of a little-documented episode, little represented at least in popular culture.  And was this matter of creating an electric chair truthfully so pivotal as this film seems to imply?

Not a film I can whole-heartedly recommend, though others may differ from my very personal appraisal.  I can safely say that I for one won't be watching it again...............5.