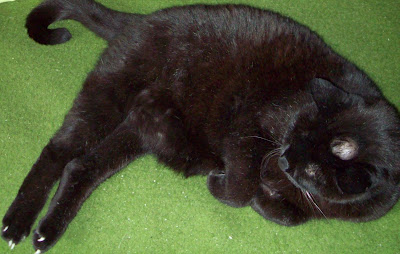 (In writing what follows below I did not wish to claim an exclusivity in depth of sorrow towards a departed, much loved  pet. I'm only too aware that a lot of readers of this blog, very likely the large majority, will have experienced similar feelings perhaps several times in their lives, or even many times. I might, however be unusual in having no one else in the whole world to talk to about it. So please understand if I use this channel to off-load my feelings here. Thanks).
My little treasure, Blackso (the Second) had been with me for less than three years, arriving on and sleeping on my outside kitchen window- sill, when with the colder weather, he finally accepted my coaxing invitation to come in. He was in a bad way - his spine and rib-cage easily felt under his fur, and with a deep wound on his crown, and he remained so for all his time with me, such that I'd assumed he must have been ill-treated and poorly fed at his former home, and had made his move to run away. But other than his more obvious physical ailments he got to be comfortable here, settling in easily, and eating well and sleeping in a corner by a heater - though drinking loads of water, a sure sign of kidney problems. But he seemed okay so I chanced avoiding the extra expense of taking him to a vet as he wasn't in any obvious pain or discomfort. I'd no idea where he'd come from, nor his age, which could have been anywhere between 10 and 20, and was alert to looking for any notice asking for the whereabouts of a missing all-black cat, notices which one sees all the time here, pasted onto lamp-posts or other street furniture.... but nothing. If he'd wanted to move on I wouldn't have forced him to stay.

I knew the day would come, and it did the day before yesterday, when I caught him pitifully trying to drag his hind legs along the carpet to get to his litter tray. He'd also been coming out with occasional alarming  'yowls' during recent nights as he slept, sometimes under my bed. I made an appointment with my regular vet for early yesterday morning, bracing myself for the likelihood that he was beyond practical help, especially considering his apparent advanced age. Carrying him in the cat-cage the mile or so to the vet was a miserable experience for both of us, me letting him regularly hear my hopefully reassuring voice that I was by his side while he gave little frightened miaows.

The vet, on taking him out of the container, started on an unexpected note of hope that it may not be the end for him. But then with scan along his back, discovered to my surprise that he'd been microchipped, which I had never suspected for one moment, assuming that if he had been badly treated by his former owner(s) they wuld hardly have bothered to get him microchipped.  For obvious reasons of confidentiality I couldn't be told the owner's identity or where they lived, but the vet had been in contact and a lady was to call round later in the day and I was to leave Blackso there while they'd check him over thoroughly. I was told they'd ring me when there was any news. I returned home with a bit of a spring in my step, having asked the vet to inform the owner that I'd be happy to keep and care for Blackso for the remainder of his days. Of course they didn't call me back. At my wit's end I finally rang the vet at 4 o'clock. The receptionist, with smile in voice, said cheerily "Oh, he's been put to sleep". I was speechless. I spluttered to enquire if the owner had been in and was told that she did indeed come in, had a look at him but didn't want to take him back...........so asked the vet to have him put down. (She was, after all, his 'official' owner, like it or not). I had to finish the call quickly before I started blubbing uncontrollably, just after the receptionist gave me a cheery "Goodbye!". I went into the bedroom where my other three cats were sleeping - yes, I've still got three, and I dare say that many might think that I should be grateful for having them, and I most certainly am not in the least ungrateful. I value each of them as the best friends I've got   But the tears flooded, my wailing waking up all three of them, looking at me curiously, then putting their heads back down and continuing their dreams. But what hurt most - and still hurts deeply - is that I never got to say a proper farewell to my good, affectionate little pal, leaving him to exit this world alone in a strange and frightening environment, as if I'd deserted him -  and my not having expressed my gratitude to him for choosing me to live with and have the privilege of my appreciating and caring for him. But you will live on forever in my heart, my dearest one.

As a p.s., I'll just mention re my eyes and their cataracts, that I go for an assessment in 6 weeks time and which, if favourable, an operation on left eye should take place 2-3 weeks later, with the other eye being done some weeks after that. This all happens 20 miles away. If I preferred to wait for a more local hospital to do it there's a current waiting-list time of two years!

When ths interminable nuisance is all over - this blog has taken me more than two hours to write, such a slow, painful process it is -  and I've got some semblance of 'normal' vision back, be assured I'll return to both blogging more regularly and (most importantly) resume a daily reading of all your own blogs. Any 'hiccups' in my progress will be duly reported on.