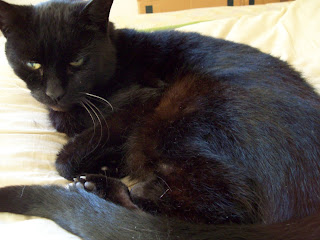 (There's a worrisome update to this story in italics at the end.)
I really thought I'd be posting a 'Blackso R.I.P' this morning. My nerves are still shredded after yesterday's happening.

My dearest friend in all the world, now 18 years old, had an unhappy accident at about 5 p.m. when he attempted to get onto the cover I keep on a large, square, metal crate which I keep in the kitchen for the rubbish bags before taking them to the outside bins. It's his current choice of sleeping location, along with the worktop next to the kitchen sink.
Not for the first time, when he jumped up it gave way under him and he plunged inside the crate, but on this occasion it seemed to have done him serious damage. When I pulled him out he couldn't stand or even sit on his hind legs., which had collapsed under him and he could only lay on his side. His eyes were fearful, darting rapidly from side to side, something I've never seen before. While working out what I could do I tried to console him with gentle strokes, half in tears myself. This happened just a few minutes before his regular vet was closing so it was too late for that - and it's not open at weekends either, though there's an emergency number. Meanwhile there was the tragic picture of Blackso needing to get to the bathroom for the litter tray he always uses, pulling himself along on front legs, his hind quarters dragging along the carpet. It seemed that something was broken. I helped him to the tray where he promptly let it out both ends together, vomiting violently while doing a poo - and then turning over in the litter and covering himself with both stuffs. My heart was breaking in two. After it seemed to be all expelled I picked him up and put him back on the kitchen carpet on a newspaper, using a kitchen towel to clear some of the muck off him, and then resigned myself to having to call out the emergency vet. But I had no money on me. So, leaving him lying there in what must have been painful physical and mental turmoil had to go out, half-sobbing, to the nearest cash machine so I could pay a vet call-out charge at least - and, on the way, would you believe, bumped into Patchie, further away than I've ever seen him before. Of course he recognised me and was determined to follow wherever I was to go - just as I was about to cross a busy dual-carriageway, and in the rush hour! So had to lead him all the way back home and shut him in. When we got back, and to my utter surprise, Blackso had somehow managed to get himself back up onto the kitchen worktop beside the sink. He'd have used a nearby chair as an intermediate step-up, but how he could have even got onto that I just don't know. He was still in a lying position and covered in you-know-what. I went out again for the cash and on returning found him there, still dazed, eyes still swivelling this way and that, but his breathing seemed to be less frantic and laboured.  I decided not to call the vet emergency just yet and wait to see how he developed. Maybe an hour or so later when I checked he'd started cleaning himself up (yuk!) - and later I was over the moon to see him sitting up normally again, and he drank water and some meaty I offered.
He slept there all night (I checked him twice during the dark hours) and this morning he's back to eating heartily - and, most importantly of all, back to his 'normal' walking again, in his own, usual, advanced-age, loping style looking every bit as though he's drunk.  (I've been fearing for him waking along walls for some time now as he can't seem to keep in a straight line.) He went to his litter tray by himself this morning, on all four legs, and I put him outside for his morning 'constitutional', keeping an eye on him from the window - and all seems now as it was before the accident.

So, if I'd been saying prayers for him I'd now be claiming that they'd been answered! All okay now, but what a mighty scare that was!
Of course I'm fully aware that at his age he can't have much time left, and when it does come, although it'll not be unexpected it's still going to be hard to bear. But that day has been postponed - for now - and I've got the continued company of my dearest of friends for at least a while longer.

And how is Blackso right now? Oh, he's forgotten about it!

Unfortunate update at 1.30 p.m.:-
His hind legs have buckled again, and that after a morning of moving about normally. He's now sleeping on the kitchen worktop on his side. If it's any consolation to him and myself he doesn't appear to be in the distressful panic he was yesterday when it happened but clearly something serious is wrong. Please, PLEASE mend again, my dearest one!

Further update at 7 p.m.
He's now walking on all fours once more - a bit more wobbly than he usually is but at least he's still got a bit of strength in those hind legs. Keep fighting, Son.

One more update - a day later, 5.30 a.m.
I've been up since 3 a.m. and he seems yo be fine again - walking with no problem, going to his litter tray without difficulty, and eating heartily. Of course it all could take a sudden downturn again at any time so I can't pretend it won't happen no matter how much I wish it wouldn't.
All the good wishes he's had must be working and I'll pass on the very latest messages as well. Meantime, it's a case of appreciating his continued presence with me and demonstrating it with nothing but unconditional love.
Any further developments, which will surely and sadly be downturns, I'll tell you of in a new post. Meantime, grateful thanks to everybody for all your thoughts and concerns.  XXXXXX.
Posted by Raybeard at 01:28