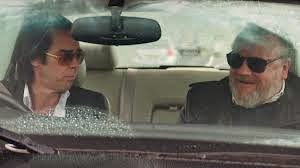 I was enticed to see this because it held the promise of being the kind of quirky and wayward type of film I'm favourably disposed towards, as well as it having received some positive reviews. It was with some disappointment, then, that it turned out to be much more straight forward than that.

I was aware of Nick Cave, Australian singer and front man of 'The Bad Seeds', but he wasn't much more than a peripheral figure to me. I'd always associated the name with a gloomy demeanour, semi-reclusive and even maybe a trifle misanthropic. I was way off target in that assessment. (He surprisingly does actually smile a fair bit). This film purports to document his 20,000th day, during which he discourses and reminisces about events in his life to various others, including a counsellor (or psychotherapist?) about his early life and about his father in particular. He talks to a member of his group, recounting performing at the same gig as Nina Simone ('Jekyll and Hyde'). He comments on his life, including spiritual aspects, to the camera and off it - and, riding up and down the seafront at nearby Brighton (with which I'm very familiar), takes on as  chat-passengers, first Ray Winstone (above) and later the divine Kylie, with whom he'd duetted and had his biggest and only U.K. Top 20 hit, 'Where with Wild Roses Grow', in 1995.
The film is interesting enough, never really dull, but also nothing exceptional. I was expecting something on the 'stream of consciousness' line but it's not much more than a vehicle for letting him say what he wants about particular events. Whether it's all true I don't know and, frankly, I'm not too fussed about it either way.
His diehard fans or those who have taken more interest in him than I have will get more out of it than I did. In its favour I must say that I wasn't really bored and the hour and a half never seemed to drag. But by the end I was asking myself "So what?" It won't be on my list of the more memorable films of the year..........................5/10.
Posted by Raybeard at 12:03