Ain't he a handsome hunk? 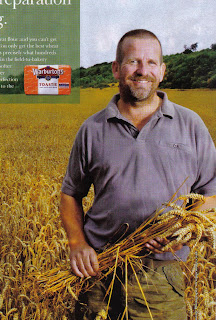 One can find pleasant surprises in some unlikely places - like when I was riffling through our current TV/radio listings guide and came across this advert for bread - and I just had to stop. What a bear! Beautiful smile with more than a hint of sensitiveness underneath. Of course I'm aware that he almost certainly isn't the farmer he's posing as, but what the hell! And wearing those camo pants is the final macho touch to a glorious masculine image. I was also wondering if there was, say for the sake of argument, a whip in his hand instead of that wheat...... It's all just too much. This is the kind of guy from whom I want bear-hugs - Yeah!
Posted by Raybeard at 07:24 No comments:

Sad time for me

Last night the wife of one of my very few friends rang to tell me that he had passed away. John had been magnificently influential to me since we first met in a gay bar in Amsterdam in the early 1980s. He was at that time about as old as I am now and I could see that his then conspicuous age in a place where youthful looks was everything was isolating him. So, yes, out of pity, I started talking to him and what a fruitful friendship it turned out to be! Although he lived with his wife in an isolated part of England I did visit them once. But he visited me when I lived in Germany, we made further trips to Amsterdam together, as well as twice to Berlin, one time even with his wife. Even when I first talked with him he told me that he had six adult children and was a grandfather several times over. His wife was aware of an 'alternative' side of his personality, as were his children who, apparently, were all relaxed about it. (His youngest daughter thought it was 'hilarious'!) But John had a giant philosphical intellect which would put most, including me, to shame. He was also a Wagner-worshipper - a composer I can live with but don't adulate quite as much as he did.
In one very surprising respect John opened up a new feature of my life - disco-dancing. Before our acquaintanceship the thought of twirling alone on the disco floor so embarrassed me that I would always stand on the sidelines looking on longingly and enviously. But John found it so exhilerating he didn't care what anyone else thought. It certainly looked, erm, 'unusual' to see a white-haired old man energetically jigging around among youngsters some of whom looked askance or bemusedly at him. (By the way, he wasn't just sober - he was also teetotal.) So one day I forced myself onto the floor with him and started letting go. It was indescribably great. In fact for the next ten years there were hardly greater pleasures for me than shaking a leg or three on the disco floors of Gay Europe. I doubt I would ever have done that myself were it not for John's example.
He was 87. Last year he'd had a heart by-pass and a few years ago had had a hip replacement so the end was not totally surprising. But he was active right up to the last - caring for his very large garden which he and his wife let out for public viewings. I hadn't actuallyseen him since he visited me in 1997 when I lived in Brighton but we kept phone contact about once a month. It's unusual for me to lose a friend by means other than through the big 'A' but it makes it quite as devastating. I'll miss him one hell of a lot.
Posted by Raybeard at 08:51 5 comments: 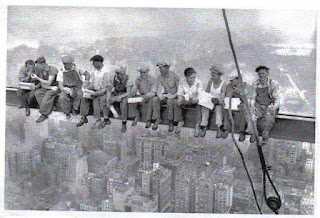 Am I unusual in feeling giddy almost to the point of nausea when looking at this photo? (Yes, I know it's a well known pic. - 'Rockerfeller Center 1932') I think I read somewhere that there was actually a platform below the men just out of camera-shot, though still far enough under them to cause injury if anyone fell. But my imagination doesn't allow me to look at this photo for any length of time, feeling a disturbingly unnerving tingling in the soles of my feet as well as between balls and spine-base (why?). I keep having the curiously inappropriate thought "What if one of the men's shoes fell off?" when knowing full well that laced shoes hardly ever do so. I get a similar feeling of dizziness, though not quite so acute, while looking up at a very tall structure from ground level. Very strange
Posted by Raybeard at 07:14 3 comments:

Just been announced that the Government has abandoned its attempt to make hatred on grounds of sexual orientation a criminal offence - as a result of sustained opposition from our unelected House of Lords who argued for 'freedom of speech and conscience'. This is the very same body which tried to stop the repeal of the blasphemy laws a few years back - unsuccessfully then, thank God (if there were one!). There are already such laws protecting against hatred on grounds of race and religion but, it seems, that, unlike this attempt to criminalise public expressions of homophobia, the former are really necessary! This sexual orientation provision was part of a larger Bill which the Government feared would be entirely lost due to lack of Parliamentary time if it continued to insist on all the clauses, so they've shown the white feather on this one. No doubt the religious bigots will be crowing at their 'victory'. Shame on this lily-livered Government! Anyway, what other democracy has an entirely unelected governing chamber (including 12 Church of England bishops, for goodness' sake!) with so much power? Whenever I hear that our system of Government (along with our system of justice, our police, army - in fact everything!) is the 'envy of the World', as is regularly claimed, I don't know whether to collapse with hilarity or to puke!
Posted by Raybeard at 08:37 2 comments:

When I looked out my front window in the 5 a.m. gloom today my heart jumped when I saw a largeish shape lying in the middle of the road. It was twice the size of even my larger cat and anyway the I could see under the road light that the colours were wrong. I went down and gingerly approached it, fearing that it was another cat or a dog. It was a fox, clearly dead by being run down, but a big handsome beast it was. I know that others would describe such animals as vermin, a danger to other beasts which would have killed one of my own cats given the chance, even attacked a child or adult if cornered etc etc. Nevertheless I did feel more than a little distress as I nudged it gently to the side of the road. I do so hate to see a life snuffed out, any life at all, needlessly. Of course I've seen a few dead foxes lying on or by the roadside in my life, but not that many, and certainly never touched one before, albeit with my shoe. I had to wait until 9 0'clock until the Council offices were open to report it. The men came an hour later to remove it - before which naturally curious schoolchildren were walking past and stopping to gawk at it - some of them laughing, which I also found difficult to take. I've only just come back home after seeing M.J.'s 'This Is It' at my local cinema but all the while I felt a heavy feeling in my guts caused by seeing this creature - the sadness is still with me even now. I wish I had a thicker skin but I do feel for the suffering of all animals. Even if in this case the fatal blow was sudden I'm now thinking about whether it had a mate and cubs. I'll just have to wait until this particular mental scar heals over. Yes, I know, I know. There are far more important things to get distressed and to worry about. But I am what I am.
Posted by Raybeard at 08:39 2 comments: