Back in business - one eye cataract gone, one to go. 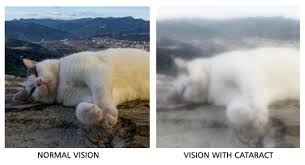 Surgery on my left eye took place yester-day. And, so far at least, things are 'looking' very fine indeed. The difference in visual acuity between both eyes is now nothing short of extraordinary. I hadn't expected to have been missing as much as can now be seen with the remedied eye, for both distance and even close-up reading without any aid. Being short-sighted, I'd been wearing contact lenses for exactly 50 years this year, while until recently had always been able to read easily with no assistance. That changed around Xmas time when the speed of deterioration in both eyes for both long-distance and near was alarming, such that for the last few weeks have been hardly able to see or read little at all, even with large magnifying glass - and any writing on this laptop had to be zoomed in on enormously, with my own typing becoming arduous and slow. Now no more. Henceforth I can resume reading others' blogs and making comments on them. Happy days! As at now, though, have to say that seeing properly with just the one good eye feels awkward and lop-sided, though suppose it just needs getting used to. Was only allowed to remove the taped-on transparent, plastic eye-shield this morning, and have just begun the eye-drops ritual, one type four times daily, another twice daily, for two weeks. The uncomfortable grit-in-eye sensation I had yesterday from after surgery until bed-time has receded significantly, though not entirely. Now there's a wait till mid-June to return for a follow-up check which, if satisfactory, operation on other eye will be scheduled. So, assuming the right eye will have the same sort of timetable,  it could be all done and dusted by September, or maybe October - when then I can say "Farewell forever, contacts!" - and perhaps the same for spectacles too. I'd been told that despite being able to see distances I'd probably need glasses for reading. However, that's not the case so far, even if today it's been a little bit tiring. But if it turns out that specs just for reading are needed it'll cause me no consternation at all - and will in any case be far, far cheaper than contacts.

The surgery itself wasn't too bad, only a little discomfort at having to keep on staring at a very bright light while the surgeon tinkered around and in the front of the eyeball, taking out and replacing the defective lens, which was disconcerting if thinking too much about it, especially when I could see and feel the eye being irrigated every few seconds. The whole procedure must have lasted just seven or eight minutes. Hardly any true physical 'pain' as such.

Before and after the operation one had to go through a series of specialists, each taking care of a particular aspect of the procedures. All were making an effort to be cordial and to set one at ease, but for every one I could detect a cold efficiency beneath, which was okay as there were about a dozen patients all there for the same operation, and no doubt others too later when mine was passed.

Now I can see the clarity and the colours I'd been missing it's really like another world - Dorothy opening the door onto Oz! I've yet to go outside but it'll be such a relief to be able cross the road safely again and to be able to go shopping without having to guess that what I was picking from off the shelves was what I needed just because the shape of it felt like what I was after.

Incidentally, it's now more evident than I suspected that the vision in my uncorrected right eye is so much like those sepia-tinted photographs of old, the 1930s and before - exactly like that for my experience - blurred outlines with all the colour toned right down or completely washed out. (Not quite as in the comparative illustration I show above). What a difference in sight to the other untreated eye. Truly extraordinary! And oh, to be able after several months, to read a newspaper again - and books, books, books!

By the way, one snag I had both getting to and returning home after the surgery, was discovering how prone I now am to travel sickness. The eye-clinic for this area is in the middle of nowhere, an outlandish place to get to, about 20 miles from here, inaccessible by regular public transport of any kind. However, thanks to our glorious National Health Service, a lift both ways can be arranged at no charge (a taxi would cost over £40 or $50 U.S. - each way!). Of course the operations themselves are paid for too. (Ta muchly again, NHS!). Last month had to make my first visit there for a pre-surgery assessment involving several test. But being driven there and back, in a Health Service-provided car, was a most uncomfortable experience. It was my first time on any mode of travel - train, bus, car - in three years, and, boy, did I feel it! Travel sickness. Up and down, start and stop, crawl and shoot along. Yesterday, expecting the same, I went prepared with bottle of water and several plastic bags which I could heave into if the worst came to the worst. In the event, the worst did occur, both going and returning - though thankfully, both times nothing was brought up, my having purposely eaten very little, though making the two drivers, different ones each way, express reasonable alarm at my several loud retching noises. Terrifically embarrassing. Must get something from the chemist for when I have to go next time in June.

So I'm halfway there now. Quite enough to make my presence better known on these pages once more. Can't promise that I can catch up on reading all the blogs I've missed but I still hope to slot myself in here and there without being over-conspicuous and over-bearing. We'll see how it goes. Meanwhile, though I know that several of those who read this blog will have undergone cataract removal surgery themselves and will recognise much of what I've described. For those who haven't and have yet to tread this path, I can assure them that although a degree of trepidation as I experienced will be entirely natural, there is nothing to fear - and there's a very high chance indeed, that your result will be as positive as mine seems to be - and that you also will be singing its praises.

P.S. All my pussies are fine - now including a 'new' young black-and-white sweetie from a few doors away, and who, without asking permission, has filled the vacancy left by my late, dearest Blackso. He now sleeps and eats here all the time, though of course he can always return to his rightful home should he prefer. I can only hope the landlord doesn't find out as I did promise him that when my then four 'residents' disappeared one by one (for whatever reason), I wouldn't replace them. A photo of the new one, whom I've yet to name, will appear in due course.