Film: 'A Most Wanted Man' 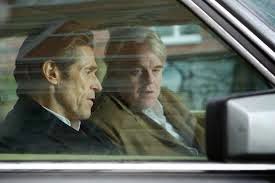 Ah, here's another instalment in the long, well-regarded series of 'One of Philip Seymour Hoffman's Last Films'.
So is that it? Actually, 'no'. You'll have to wait and see.

Dutch director Anton Corbijn makes a good fist of adapting this John le Carre thriller - just as he did for 'The American' (2010).
Set entirely in Hamburg, Hoffman plays a chain-smoking, senior German intelligence officer, trying to identify and nab Islamic terrorists before any atrocities occur. (Hamburg was where 9/11 was masterminded.)
A young Chechnyan, tortured by Russians, smuggles himself into the city harbour, having travelled via Turkey, and is offered the assistance of a young female civil rights lawyer (Rachel McAdams) who can help him with his request for asylum in Germany. But there's a question as to whether this devout Muslim is really a jihadist, which we're not sure of ourselves until fairly well into the film. He's given a place to hide by his lawyer until his status can be resolved.
He's come to Hamburg because it turns out that he's inherited a huge sum of ill-gotten money here (he doesn't how large it is - millions of Euros), which he decides to donate to charities and philanthropic causes because it's tainted - and it's left to a wealthy Muslim business man to distribute, someone who's been the object of suspicion from the authorities for some time. So a trap is set. Unbeknownst to this man (and to the young asylum-seeker), he's given the chance to divert a part of these funds to a seemingly respectable organisation which is actually known to be a front for terrorism. Will he take the bait? Willem Dafoe plays the bank manager who is reluctantly roped in to help set the trap.

Even though there are no explosions, car chases, gun-fights - in fact no big set-pieces at all - the tension is created from the start and maintained throughout with no let-up.
Hamburg is a good, interesting  backdrop for the story, and it certainly makes a refreshing change from all the Londons, Parises, New Yorks etc of which we see so much.
Acting is of a very high standard from all the cast. There have been mutterings about Hoffman's German accent which some have thought strange or even comical, though I wasn't too distracted by it. He performs to the standard we always expected of him, i.e. high.
Very importantly for a Le Carre thriller, I didn't get lost as much as I sometimes do. Another noteworthy fact is that, dealing with subterfuge, I thought that a lot of the dialogue might be whispered and lost in incoherent mumblings, but that turned out not to be the case at all.

I've got little to fault with this film. It's a full two hours long and although there's not much physical action it didn't feel slow or boring. Better than merely satisfying...............7
Posted by Raybeard at 07:46