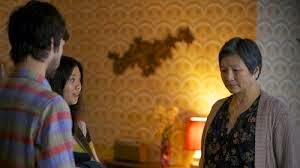 This was next on the list to see before I had my very public tumble on a Brighton street seven weeks ago, thereby having to cancel my intention. It's very fortuitous that a second chance came along, especially since I see it already being advertised as now available on DVD and Blu-Ray (whatever that is!).

Ben Whishaw plays the surviving member of a co-habiting couple after his partner dies. (We only get to know the cause of death just before the film's end.) He tries to make an approach to his partner's Chinese-Cambodian, non-English-speaking mother (Pei Pei Cheng), now single and in a residential home, in order to fulfil the obligation he feels to ensure she is well cared for. But she keeps a cool distance from him, resenting his having taken her son from her when she feels the son's first duty should have been towards her own welfare. She sees the couple as having had nothing more than a close friendship - or does she suspect the truth and is unable to accept it?
The Whishaw character brings in a young woman (Naomi Christie) to translate, ostensibly at first  for a counterpoint strand, namely a growing romance between the mother and another single, elderly English resident of the home, Peter Bowles (a well-known face for British TV viewers, and an actor whom I've also seen on stage a few times).  These two older 'love-birds', being unable to communicate in words, the translator is called in as a favour on Whishaw's part, to try to ease their relationship along, if and when they need it.  Inevitably, the translator also begins translating conversations between Whishaw and the mother, which at times gets painfully close to the bone when truths and underlying attitudes start coming to the surface. The young woman then finds herself as more than just a go-between and reluctantly finds herself being drawn into their world.
We see Whishaw with his late partner (Andrew Leung) several times in flashback, and though they superficially seem to be a fine-looking, loving couple, I got the feeling that the two of them could have had the occasional blazing row, both having fiery temperaments. But that was only my impression.

Much of the dialogue is in Mandarin - or was it Cambodian? ( I think not Cambodian, as actress Pei Pei Cheng - previously of 'Crouching Tiger, Hidden Dragon' - is Chinese). All the conversations between her and her son, in flashback, are translated through subtitles, while between the mother and Bowles, and mother and Whishaw are translated directly by the young woman.

I was hooked on the story from the outset even though there's hardly any 'action'. It's a very emotion-based piece, but never monotonous for all that.
Every one of the quintet of actors was quite astonishing. It would be invidious to pick just one of them out for special praise. Nevertheless, that's exactly what I'm going to do, and name Naomi Christie (the translator) who manages to write her conflict and inner turmoil on her face as she witnesses things being said when she knows she ought to exercise detachment. Her under-the-skin performance is extraordinary. And then there's the mono-lingual mother, all emotion tightly constrained and knotted up in her body.

All in all a very satisfying and moving miniature drama. I'm glad to have had the chance to see it on screen. Director Hong Khaou (excellent and faultless) has shot it in wide-screen for some reason, when I would have thought that for something so domestic and intimate as this a normal ratio might have suited better. However, I'm not going to carp at that.