Ukraine wins Eurovision. Who'd have guessed it? Everybody!

..........and with a song I'd have ranked around 10th out of the 25 finalists. However, to be fair to the winners, even before the Russian invasion it was being talked about as a leading contender to carry off the prize. At least it blows Russian President Putrid another raspberry if, as increasing evidence suggests, he is playing out the terminal stages of his ignominious life (Parkinson's? AND thyroid cancer? Cancer of the blood? All triggered by excessive use of steroids?) And all as if his country having been banned from even entering this year's contest wasn't hurtful enough to someone who sets such store on international prestige! 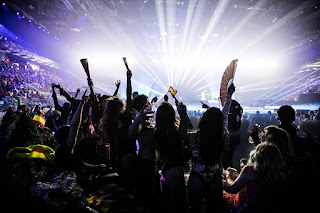 Turin was the host for this year's consp-icuou-sly gay extrav-aganza, Italy having won the contest in 2021 - and with the usual indifferent (to me) entry.

Other than the winners, the main headline was that the U.K. entry, Sam Ryder, took our country out of its habitual laughing-stock zone of finishing last - even attaining the dreaded nul points two years ago - by now finishing second, even though I rated his song 'Space Man' (with its 1970s-ish Bowie-esque title) worthy of ending in around 20th place. 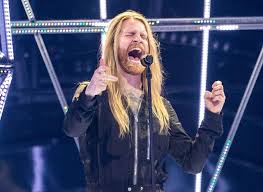 It's 20 years since we attained even 3rd place and it was 1997 when we last won outright, so this was a most welcome result. This entry, sung entirely in high-register voice, actually came out top when the first round of voting was announced, that being the verdict of each of the 40 countries' music jury, so there must have been something special about it, though that merit escapes me - possibly an 'age thing'? 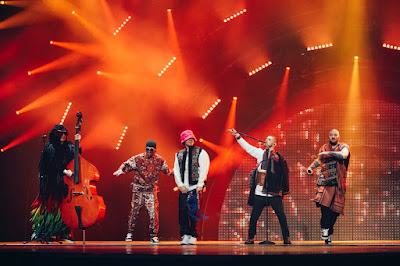 Ukraine's winning entry ('Stefania' by the 'Kalusha Orchestra') was in no way bad - just unexceptional to my ears. It merely ticked the requisite boxes. 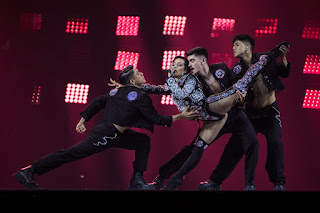 Third came Spain, one to run to the kitchen and make a mug of coffee. 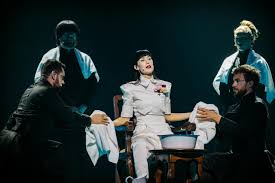 Fourth, Sweden and fifth, Serbia - the latter with its curious continuous hand-washing act, the singer being attended to by a group of male, bearded acolytes with towels at the ready to hand to her to dry before she dipped her hand in the washing bowl again. A strange offering among several oddities! 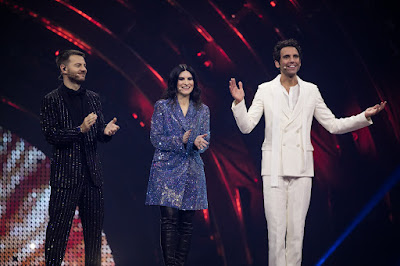 The event's presenters Alessandro Cattelan, Laura Pauosoni and that brief 2007 sensation, the British-Lebanese,  Mika (yes, that one, 'Grace Kelly' and all that - so impressive at the time that I actually bought his first two albums! I wondered what had become of him - but he's apparently still a celebrity in Italy, among other places).

Complete with the ever-maddening "Now, are you ready!" - when we'd been yelling at the telly "Jeez, just get on with it!!!" for the previous 20 minutes - she in the middle was by far the most gratingly irritating, and being well known in Italy, just had to start the show with not one, but a medley of four of her hit songs in Italy - and all when there were no less than twenty-five competition songs to get through! Sheeesh! It was nearly 20 minutes in before we heard the first entry proper. Then in the pre-results hiatus Mika himself gave a selection of his own songs, which was better and, at least, more familiar and less jarring.

My own three favourite entries were not supported by results corresponding to my opinions. 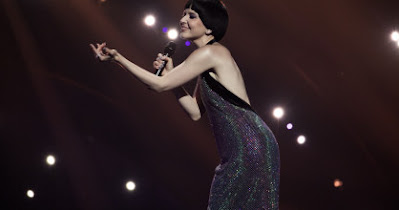 I put Lithuania top - a song for which commentator Graham Norton expressed surprise that it had got into the final, so what do I know? A gentle, unshowy foot-tapping number sung by the sleek Monika Liu in slinky dress, entirely alone with no distracting dancers or visual fireworks. I thought it was the best by a mile.  It finished 14th. 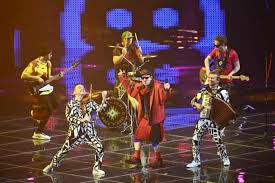 Then I placed the happiest entry - from Moldova, even if it was about a railway line! They seemed so darned cheerful and were having a whale of a time performing it, and lifting my spirits. Finished 7th. 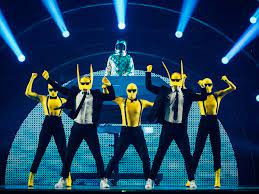 And then in third place I'd have put the dottiest entry, Norway's 'Give that Wolf a Banana' by Subwoolfer (in yellow wolf-masks). Daft, but original, funny and compelling. Finished 10th.

A few curiosities - I was disappointed that Israel didn't get through to the final as I thought it the campest of all the turns........ 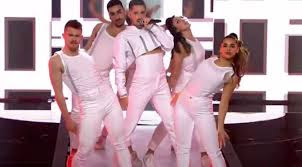 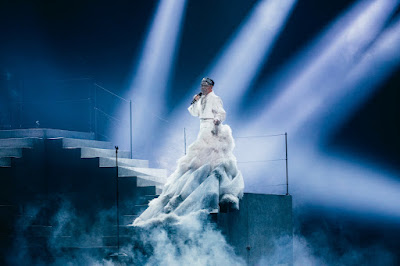 Then Australia, which did make it to this final, coming 15th, featuring one Sheldon Riley singing tearfully how he, as a young boy, felt 'different' and his coming out as gay - all the while dragging a heavy train of white plume behind him which must have been ever so uncomfortable - and he looked like it was!
San Marino, ditched in the semi-finals, had ended with a man-man kiss. But the song wasn't 'special' enough - as weren't over half of those that actually did make it to the final.
This year's wooden spoon prize went to Germany, just below France - two of the biggest financial contributors to the contest taking the bottom two places.
And what about the voting? We'd always been used to beng allowed to cast just the one vote by telephone (now plus computer and other modern means of communicating) - but obviously not for one's own country. This time the presenters twice said "You have twenty votes at your disposal!" "WHAT?" I thought. Yet Graham Norton went on about voting for your favourite song/entry - emphatically in the singular! Did he not hear them? Didn't he know? Did it mean that we could, if we wished, vote for up to 20 countries which we liked? I can't have been alone in noticing this. If it meant that we, perhaps along with other countries, were deprived of registering all our likes, then surely the final results will have been skewed, to some unfavourably, to others in their favour. I await someone else pointing this out - and the verdict thereon.
So, all in all, a reasonable contest, even if my last point leaves me with an uncertain taste in the mouth. But hey, at least the U.K. is once again one of Eurovision's big league players, and that's no mean thing. 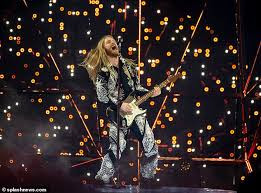 Kyiv next year then? Russian-less and defiantly independent we trust - and by then as much 'repaired' as we can help with.