Film: 'Magic in the Moonlight' 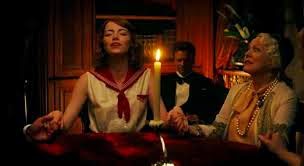 Anyone who knows my blogs will have long ago picked up how much I generally like Woody Allen films, one of a very few directors for whom I'll go out of my way to see anything new.
If I were to categorise his films into, say, 'Exceptional', 'Good', 'Middling' and 'Disposable' (his previous, 'Blue Jasmine', was right up there in Category I) here's one which struggles to find a place in the lower reaches of 'Middling', a section which is becoming, alas, rather over-populated of late.
The story is light as a bubble, though insufficiently equipped with wit or drive. In fact it gets to be rather tedious.

Set at the end of the 1920s, Colin Firth plays a Chinese illusionist, suitably made-up of course, on the European theatrical circuit. (Remember the name - that's F-I-R-T-H - because, mark my words, you'll be seeing more of him before long, I guarantee it. He ought to go far. Very far.) Incidentally, there's a welcome, brief cameo appearance in this early part, from Ute Lemper - singing in a Berlin night club. (Where else?).
A long-term friend of Firth's character (Simon McBurney) tells him of this amazing young American medium he knows with extraordinary psychic powers and who holds seances. Firth, a great believer in the rational only,  had already made it his mission to debunk such fraudsters, which he claims all such to be, and rises to the challenge of investigating this young woman (Emma Stone). Scene moves to south coast of France where it stays for rest of film, with some ravishing scenery. Convenient because Stone is staying in a place which also has Firth's aunt (the formidable Eileen Atkins) living in the neighbourhood. Stone, already engaged to a ukelele-playing, wealthy young man, is intrigued by Firth and his scepticism. It doesn't take long for unexpected emotions to surface on both sides.

(Spoiler alert!) Long before the end of the film a certain feeling of deja vu came to my mind - and I managed to wheedle out what it was - 'My Fair Lady'! And, wouldn't you know it? The very end of the film is exactly like the close of that piece.

Woody Allen (director and writer) seems not to have his heart in this one. It ought to have been light and fluffy instead of being largely flat. Potentially funny situations were thrown away. There were no laugh-out-loud moments at all, only a couple of weak chuckles-worth.
No real quarrels with the acting from anyone - well, apart from one or two moments of sounding forced.
Another disappointment was that the music seemed to be a roll-call of only the most popular melodies and songs of the period, like ticking them off on a list. I don't think that there was a single number with which I wasn't familiar. I'd have thought that Allen, with his encyclopaedic knowledge of music, jazz above all, could have chosen some lesser-known pieces to make the film more interesting, because that's what was needed.

A disappointment, then. But second-rate, or even third-rate, Woody Allen is not to be dismissed lightly even if, as here, he seemed to be running on auto. I just had to see it anyway. Now that I have I shan't be rushing to give it a second watch. My rating will illustrate the extent to which I'm willing to give Allen the benefit of any doubt. I confess I wouldn't be so accommodating to many other directors ...........................5.5.