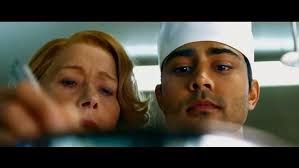 I'm risking losing a number of friends by saying this, but I found very little to like about this film - save for multiple sumptuous shots of food, pre-, during and after preparation - and the luminous presence of Helen Mirren at her most endearingly watchable, even when playing haughty, as she does for the first hour before a certain epiphanous event.  But I'm not going to pretend that I was impressed. Otherwise, if you like gooey sentiment served in XXL spadefuls, complete with almost all-pervading music telling you what emotion you are to possess at that point, then do go along  - and suffocate! But if that still isn't enough in this overlong, two-hour film, don't forget to note the obligatory downpours (we all know it can never simply rain in films), sightseer-shots of Paris, complete, in at least one point, with accompanying accordian music just in case it slipped your mind in which country La Tour Eiffel is located - and then there's parallel double romances, young and old (well, in the latter case, a promise of it).

The always reliable Om Puri plays the patriarch of a family, who decides to leave his native India with his five children after his restaurant is destroyed by a mob, his wife perishing. They go to Europe and, by chance (or maybe 'fate', we are led to believe), end up in a small town in southern France, where he decides to open up a new Indian restaurant in a derelict property he notices, which happens to be exactly on the other side of the road from a very fashionable and celebrated restaurant run by the domineering Madame Mallory (Mirren). Cue rivalry and hostilities.
Very early romantic interest is provided between the father's eldest son (Manish Dayal) and the sole young female employee (Charlotte le Bon) in the kitchens of the restaurant opposite. Cue friction and conflict of interest.
The culinary expertise of the son takes off like a rocket and, before you can order more onion bhajis, he's a national celebrity, and is lured to work in the capital. (Being stopped outside by members of the public asking to take his photo. How often does that happen to cooks who are not even regularly on the telly, especially to one barely out of his teens? - if even so 'old' as that?)

I also found much of the script flat and predictable. In fact, early in the film I started playing a game of, when someone said a line, guessing the rejoinder - and more often than not I was right or very close. They might as well have played it in silence.

Swedish Director Lasse Halstrom has created some notable films in his career. Some of them I have liked, even a lot - while others I just failed to 'get'. You know in which category I place this one.

I ought to mention that the sight of meat, poultry and fish (very occasionally in 'living' form) did not affect my overall opinion. My reaction in this respect is very personal and it wouldn't be fair to use it against a film which might have been considered 'worthy'. However, even that aside, I did find this very heavy going - and without Helen Mirren to lighten the moments I would have found the entire venture unbearable.
No doubt many will enjoy it. It's already collected a current high average rating of 7.6 on IMDb. The score I submitted was...........................3/10