I'm not an avid TV watcher - can't be bothered with any soaps, 'talent' shows or cookery/ gardening/fashion programmes. 'Big Bro' is out, as are comedy series (the latter with one or two British exceptions - okay, in recent times Ricky Gervais and Steve Coogan). Animal programmes too are to be avoided as I can't bear to see them suffering, even in a natural environment, or being used as entertainment. I tend to gravitate towards arty-farty factual programmes, some science (partic. Astronomy), and political issues and discussions.
However there is one type of show which doesn't fit into any of the above categories which I do enjoy, and which seems a bit at odds with the rest of my tastes. These are real-life cop shows, where we follow them chasing speeders and drunken drivers, arresting burglars, breaking into drug-suspects' houses, breaking up drunken brawls, nabbing the occasional flasher etc. I experience quite a dose of schadenfreude on seeing miscreants caught, arrested and being told of their subsequent fines/imprisonment. Don't know why this should be as I'm not an especial fan of the police, with my deeply ingrained memories of how so many of them used to be prejudiced and corrupt, though that seems to be nowhere near as bad now as it was in the past. I really do applaud their apprehension of genuine wrong-doers. (And, as a bonus, some of them look so attractively macho in their uniforms!) My watching of these programmes is not quite an addiction but it does round off my evening with a glow of satisfaction knowing that at least some unsociable acts are being stamped on. Maybe it helps me feel safer and, consequently, think that I may sleep better.
Posted by Raybeard at 07:39 9 comments:

It's been said that a keen reader will get through around 2,000 books in an average lifetime. Well, I lost a bit of time in being 24 before the reading bug really bit me. Now, as I'm about to reach a landmark number (excluding around 250 re-reads) I'm wondering if I will ever reach the 2K figure, but no matter. (By the way, I reckon that only about 100 of the total to date have been non-fiction).
So what's this particular next one going to be? Well, a book which not that many will have heard of - Elizabeth Gaskell's 'Wives and Daughters' dating from the 1860s. It's her last and unfinished novel, but still runs to 600+ pages. I hadn't read any Mrs Gaskell until a few years ago when I started with 'North and South' and followed it with 'Mary Barton', both very readable, and, like her contemporary, Dickens, very much creations concerning the social mores of their time.
The book I only finished just this morning was Garrison Keillor's quite entertaining 'Lake Wobegone Days'. (We can hear back-editions of 'Prairie Home Companion' on one of our digital radio channels, which I do occasionally listen to.)
After I've read the Gaskell, next on the list will be my (at least) 6th reading of Tolstoy's 'Anna Karenina' - in a different translation from my previous encounters with this masterpiece, so maybe it ought to be counted as a 'first read'! ' Expert' opnion is that 'Karenina' is superior to 'War and Peace'. That may well be so but it's actually the latter which for me is unparalleled in Western literature for sheer awesome range of imagination. Microcosm and macrocosm as never before or since in a single novel. But 'Karenina' (and 'Resurrection', especially) would be extraordinary works anyway in the canon of anyone who hadn't also written 'W & P'.

Right, enough chatting - let's get started on 'Wives and Daughters'.


Oh, as an add-on to this blog, and on a completely different subject, must say I'm totally flummoxed by 'The Social Network' winning the Golden Globe for 'Best Picture'. Did those voting for it really hear the dialogue, because, as I've said before, for 3/4 of the film I couldn't make out a single mumbled word! The award is a total mystery to me - and I fear that my perplexity will probably return at Oscar time. (I'm certainly not complaining about Colin Firth and Annette Bening winning their categories.)
Posted by Raybeard at 07:58 7 comments: 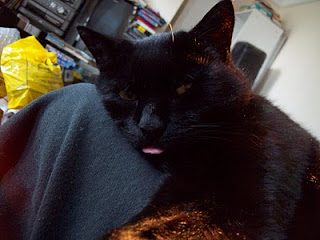 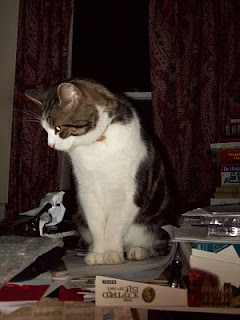 Making his mind up. 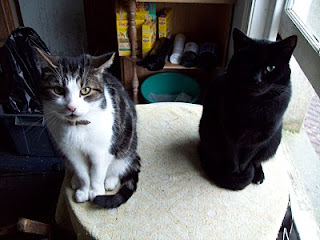 Blackso and Noodles, usually so cagey towards each other (a sort of grudging tolerance) are rarely seen in such close proximity. But when it's feeding time such niceties come second.
Posted by Raybeard at 08:09 7 comments: