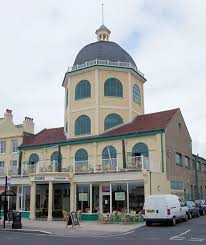 Booked to see the eagerly-awaited (by me) 'Tenet' at this local seafront cinema next Tuesday, which'll be just two days shy of six months since seeing my last film.

Told you this posting was going to be concise. 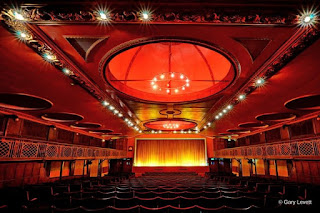 The Curse of the Growling Stomach. 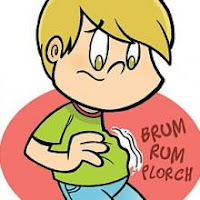 Don't know why this subject should have occurred to me this morning, but as I've not seen it mentioned in anyone's blog before, well why not give it a shot?
I don't suffer from the 'condition' now as far as I'm aware, but in younger days it used to cause me acute embarrassment.
The pinnacle of these blush-causing experiences was (and I've only ever mentioned it to one person - and it cracked him up!) way back in 1970 when, at the age of 24, I went to the cinema to see the newly-released film of Michelangelo Antonioni, one of my favourite directors, his 'Zabriskie Point' - a film largely forgotten now but in those more 'innocent' days was considered a shocking breakthrough in on-screen depiction of raw sex (hetero, naturally) - tame by today's standards when hard-core porn is freely available 'on tap' as it were (or so I've been led to believe!) Anyway, that's by the way.
Before the film I'd indulged myself in a 'meal' of one large, boiled cauliflower (then and still now my favourite vegetable), and nothing else with it. And so, stomach replete with contentment, made my way to the cinema and took my usual circle seat - this was in the days when nearly all cinemas were huge, single-screen auditoria, and if one sat in a certain place in the circle one could look down and see the front rows of the stalls below.
The film began and it wasn't long before I became aware of 'rumblings' within my person. They progressively grew in intensity of sound......and grew.......and grew. Now, as bad luck would have it, the film was not only given over to long periods of silence (long, soundless sequences with slow-moving camerawork being one of Antonioni's 'trademark' techniques) but most of it was set in or near California's Death Valley - hence the film's title - so the visuals were filmed in blazing sunlight from a cloudless desert sky, thus lighting up the entire cinema audience. So every time I 'rumbled', people were starting to turn around and look to see just where this annoyingly distracting sound was originating, in what ought to have otherwise been total silence. It got worse and worse, with me trying to sink lower in my seat. It soon dawned on me that I wasn't going to be able last out this worrying humiliation. The film wasn't yet even half-way through. I would just have to wait for a dark scene when I could creep out of the cinema relatively unnoticed. But would the screen get dark? Would it hell! I waited.....and waited......stomach rumbling on like approaching thunder. The final straw came when, unable in any way to hold it back, a stentorian growl came forth like a lion's roar, reverberating all around the place so that even a couple in the stalls way below me turned round and looked up to see what was happening. Oh, the cutting agony of it! I couldn't wait any longer for the dazzling desert scene to come to an end, even before the sex had properly started, but finally got up, wishing I'd had a high collar on or scarf to cover my identity - and shame-facedly, head depressed to almost between shoulders, I hurriedly made my way out, feeling that all eyes were on me, tut-tutting me to the exit - Begone, pest!
I returned home - and it was a further six years before I managed to catch up with another chance to see the complete film, and so at last being able to include 'Zabriskie Point' in my 'register' of films actually seen on a cinema screen.
But oh, how I still cringe when recalling the horror I went through to get there!
On even earlier instances of a related theme - though in this case caused by actual hunger rather than by having unwisely consumed something with 'consequences' - the school I attended (St Mary's College, Middlesbrough) every Thursday morning just before lunchtime, all the boys would be herded into Church to attend Mass - and when it came to tummy-rumbles it always sounded like my stomach was louder than anyone else's. After the first such sound (then emanating from whomsoever), the boys not just immediately around me, but in the pews in all directions, would giggle as quietly as they could, then cruelly await the inevitable next  'contribution' from some 'unfortunate' they could mock, albeit in stifled manner - making it still worse for those of us who were so 'afflicted'. Although it wasn't just me alone, it always sounded like my 'instrument' would be a contender for the forte prize. Helpless to supress it, it would come out whatever I did - clenching abdominal muscles, even praying, imploring God to make it stop - please! - though all to no avail. And when it did make its aural presence known ("Here I am!") they'd all snigger and laugh under their breaths - and then it would fall silent again apart from the celebrant priest's Latinate intonations, .....and they'd wait for who'd be next - more often than not, as it seemed, me again! Mental torture in extremis!
Happy days? Far from it. More like my Gethsemane! 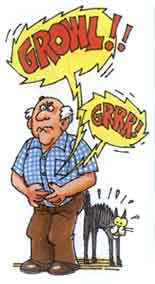 Btw; In my 'comeback' posting of a few days ago I intimated that future posts would be "concise and pithy". The two I've submitted since then have certainly not been the former. Have to bear this in mind for whatever's next.
Posted by Raybeard at 00:41 16 comments: 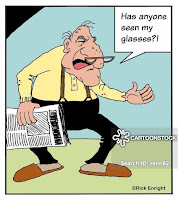 Everyone who wears spectacles occasionally misplaces them, do they not? And then they eventually find them a few minutes, perhaps even an hour or so, later.
(I always wear contact lenses when going out, having ever been the 'vain' sort. Indoors alone I have to resort to glasses).
Imagine, then. I was watching the BBC 6 o'clock national news on Friday 7th August - I need specs to watch TV, especially for when any captions or printing appears. I put the specs down on the settee beside me to go to (I can only think), the kitchen as the bulletin was coming to an end, before returning to then watch (as is my daily wont) the ITV 6.30 news - and, being the news-junkie that I am, always followed by Channel 4 News at 7, before retiring most evenings. Anyway, on coming back from the kitchen the specs are not there - and now twelve days later, still not found them! I've turned the place upside down, and not just the area where I sit to watch TV, but the few other rooms as well, including bathroom. In a single person's apartment there are only so many places one can go!
Maddening? You bet! - and more than! For the last week and half, right until yesterday, had to make do with an old, scratched (hence making all viewings fuzzy) pre-present-prescription pair.
The silver lining, if it can be so called, is that by sheer chance yesterday I had an appointment at the opticians to collect a new pair with updated prescription for which I was measured at the beginning of this month. That really was some stroke of luck. These new specs are fine. I can watch telly again. But until I can find that missing pair  (to keep as a spare, just in case.........) I won't be able to settle. Where the hell are they? Soon I'll be reduced to threatening the cats that if they don't tell me where they've hidden them there'll be no more treats! 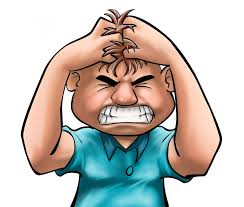 Well, blow me down! Just seen that it's over two months since our last posting (employing the royal 'we'), and this simply will not do! So here's our ploy for times coming.

With some regret (just a little bit) it would appear that my days of frequent cinema-going are now part of the past. I haven't been at all since last March, and even when it becomes possible again I should think that for me the practice wouldn't be more than a well-spaced rarity. However, on those occasions when it does happen I will still post my thoughts on any film in question as before.

Thus, in order to keep this blog alive so long as I am so myself, I will attempt to post now and again on a miscellany of subjects, hopefully not too weighty but in concise and pithy manner, so you may know there's still life in this old boy yet!