After computer troubles we're back in circulation. Only hope this ancient contraption will hold up long enough to enable me to make a significant number of further posts before it gives up again, as well as continuing my ability to comment on those of other blogpals.
Many thanks to those of you who've wished me both for the computer problems and my own health situation, the latter of which is also continuing to improve, thank you - though there is still a little way to go yet. But I'm very moved indeed by your caring remarks. 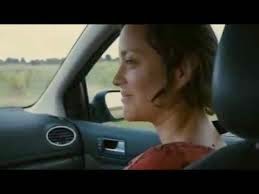 In the light of some very positive reviews I suspected that I might like this. I wasn't prepared to be so blown away by it.

Marion Cotillard, appearing in every scene, is the only bread-winner in a family of four (two young children). At the firm in Belgium where she works there has just been a ballot among a score or so of her co-workers as to whether to keep her employed or to agree to her being made redundant. If she goes the firm could afford to pay the rest of the staff a bonus of 1,000 Euros each (about £800 or $1,300 American). The vote was heavily in favour of dismissing her, thereby claiming their bonuses. However, she and her friend convince the reluctant boss to hold a re-ballot, on the grounds that the section's foreman exercised undue influence on the workers in letting her go because he was biased due to her history of absence due to depression. The new ballot is to take place on the following Monday - the film's title referring to a week-end she has in which to plead with her co-workers to change their votes in favour of her remaining. Much of the action is taken up by her doing the rounds of these colleagues and getting a range of reactions to her imploring, she being distressed at the thought of not being able to keep the family together in their flat should she lose her job. But some of them state their own cases for desperately needing the bonus money.
All the while she is taking her medication for her depression. Her husband, driving her around to make her requests, is afraid of her overdosing by her habit of reaching for her pills every time she feels down, which is often.

It's a heart-breaking tale, directed by Dardennes brothers, Jean-Pierre and Luc.
Marion Cotillard excels throughout. Her face, even when alone, is a wordless script for her emotions, continually swinging between optimism and deep despair. It's a truly amazing performance.
It's also a modest film - not over-bearing in ambition, modest in length (and presumably in budget too), and with no emotion-nudging music! It all works itself into a little miracle. My only slight reservation was that maybe the ending is ever-so-slightly too pat, but the route getting there made it a thoroughly worthwhile journey. One of my films of the year............................8.


The Keeper of Lost Causes 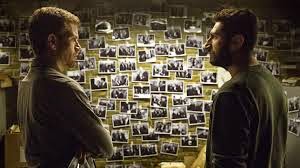 Grim Danish-language thriller which has had some very good reviews. Mine is not going to be one of them.

Director Mikkel Norgaard's film has Nikolay LeKaas as a hard-boiled detective in Denmark returning to work following recovery from being injured by a bullet in a shoot-out. But instead of being given his old job back he's shunted to one side, to his obvious and understandable displeasure, to look at and close old cases still left open on the records. He's given a middle-eastern assistant (Fares Fares) whose earnestness far exceeds any enthusiasm he has for the work himself.
He decides to focus on the case of the disappearance five years before of an aspiring young female politician who vanished from a ferry while accompanying her mentally incapacitated and mute adult brother. It had been assumed that she'd committed suicide by jumping overboard, though no body was ever found.
Despite his boss' insistence that he close the case-file he's too intrigued to let it go and he and his assistant go on a quest to find out what actually happened.
I don't think it's too much to say that we see the young woman and how she's being kept after being abducted. It's a very disturbing scenario, putting me in mind of the horrible fate of some of the Third Reich's concentration camp inmates. And if I add that when the villain is revealed he, physically, would fit so easily into that role of a sadistic 'experimenter'..........well, there's hardly any need to say more about what he looks like. If the film wasn't so serious he'd be a stereotypical caricature.

It's a dark film all through, in every sense of the word - but it's also curiously old-fashioned. In fact I found little that was 'new' about the story. It certainly has suspenseful moments, and the situation of the victim's prolonged detention made me shudder. Buy there are really few real surprises.

I haven't seen any of the Scandinavian TV thrillers that have been all the vogue for some time, but I see this as fitting into that genre, the only difference being that this is on large, wide screen, though it needn't have been.
I'd give the film high marks for conjuring up the menacing atmosphere it requires. Acting is very good from all concerned. However, overall, it didn't leave me with a strong enough impression to retain long in the mind, apart from that one aspect I've referred to.......................5.5