Further to my blog of yesterday in which I told of the situation of my computer workability being precarious, well it still remains so though I've managed to find a 'sticking-plaster' solution. How long it will hold remains to be seen. Truth is, I badly need a new computer but current financial conditions make that impossible - or even finding just a professional short-term solution. So as long as this position persists, please don't be surprised if I 'disappear' without notice. If I can see it coming I'll do my best to give due warning, though as we all know, things seem to go down rather suddenly. 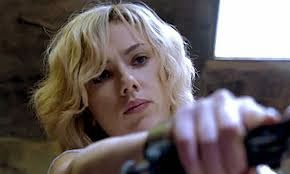 'Lucy' is a strange film, not without some merit, though it does seem to fall in love with itself in the final parts.

The increasingly impressive Scarlett Johansson (whom I actively disliked when I first noticed her in 'Lost in Translation' - not any more) plays a reluctant drug mule for a Japanese criminal gang forced into the role in Tokyo by an exploitative acquaintance. She displays her initial vulnerability convincingly well, but when the bag sewn into her abdomen bursts (she is the only female of four similar mules) the effects of the drug (actually used in small doses in pregnancies) affects her brain and gives her superhuman powers, including telekinesis, telepathy and even, eventually, physical metamorphosis. Meantime, Morgan Freeman, whose screen appearances have become a watchword for 'wisdom', keeps popping up in the midst of giving a lecture on the effects of humans using more than the usual capacity of their cerebral powers - currently about 20%, we're told. The effects of the drugs on Johansson become more spectacular as the percentage grows on its way to an ultimate goal of utilising 100% of the brain's potential.

It's a pretty violent film with some grisly scenes. I think too much effort was given into putting a scientific rationale into what was happening to Johannson. Of course with such a fantastical story it needs at least the bare bones of explanation, but I think it got bogged down in its own theorising. It might have worked better if they'd trusted the audience to just go along with it 'for the ride' rather than keep giving stodgy little sermons.
As for the final scenes, director Luc Besson, who has made a fair number of watchable films in his long career, many of which are in the more 'popular' vein, looks as though he was trying to show how clever he can be with his tricksy cinematic effects, which are, it must be said, not at all bad - and with more than one nod to Stanley Kubrick - though, frankly, I could have done without a certain 'Creation of Adam' moment.

I found 'Lucy' a bit better than merely passable entertainment, though far from being exceptional.......5.5.