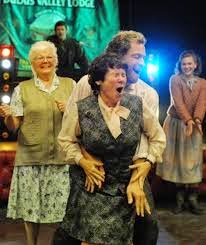 Already attracting a large number of superlatives, when I first heard about this 'feel-good' film around a month ago I inwardly groaned. On no account because of the subject matter (gays and lesbians supporting the Welsh Miners strike against the Thatcher government in 1984), more because I feared that, 'based on real events', it would play fast and loose with the facts. Of course I accept that dramatic licence is a time-honoured tradition and has a viable place in the arts, but I have such sour memories of another recent-ish film viz the dire 'The Boat That Rocked', which even a Richard Curtis screenplay and no less a figure than the formidable and late, great Philip Seymour Hoffman couldn't save from capsizing. This purported to show another socio-political event, the criminalising of pirate radio stations in the 1960s, which was such a ridiculous inversion of what actually happened that I thought 'Pride' might follow the same path. In an interview with writer Stephen Beresford he claimed that everything that happens on screen here actually took place. A bold claim indeed.

This film had a big advantage for me over 'The Boat that Rocked', namely that it's a total mystery how I don't recall the issue at all, even though it had happened nearly 20 years after the pirate radios. Of course I remember the miners' strike. I was at my most trade-union militant then (me being the single departmental trade union representative for several years)  - and, not only that, only shortly before 1984 I'd have resigned from having been national treasurer of the Local Government Officers Gay Association - which was nowhere near as grand as it sounds. (From memory I think we only had about 60 members!) So I was very politically aware on at least two fronts - as well as having attended, between the mid-1970s and late-80s something like half a dozen of the annual Gay Pride marches in London. This film begins with the 1984 march and ends with the following year's, so there's a good chance that I was at one or both - yet memories of this particular subject have I none.

The film (Director: Matthew Warchus) boasts a cast that could hardly be bettered - Bill Nighy, more restrained than he's ever been, and also the best I've ever seen him - the doughty Imelda Staunton (whom I've seen several times on stage) - the self-effacing, likeable and ever-impressive Paddy Considine - and, playing a scene-stealing, camp, middle-aged gay man, the busy Dominic West, who gets, near the film's start, a fairly extended turn on the dance floor. (Above pic of him with Staunton).

The drama is around the acceptance of an offer to help to raise funds for striking miners by a small London  group of gay young men (plus Dominic West - and one young, spikey-haired and unattractively abrasive lesbian) who decide which miners to direct their efforts towards by, more or less, sticking a pin in the telephone directory. They settle on a small town in South Wales - which is also this film's location - their actual visit there engendering suspicion, distrust and, of course, homophobia, mainly suppressed and whispered but which flares up in pockets all through the film.
I accept that the film would start with hostile parties, their enmity melting with acquaintance and finishing with total acceptance. And so it does. What I found harder to believe was how quickly entrenched attitudes could change. On the other hand, there are some characters throughout the film who do cling onto their bigotry no matter what, including some physical violence, but I was doubtful that in reality they would be not only in such a minority but that they'd be vehemently put down for their opinions by members of this most macho of occupations and their families. But if they say that's what actually happened who am I to argue?

There are several mentions of AIDS. This was at a time when the Murdoch press and all the tabloids were gifted by being allowed to peddle the 'gay plague' myth with impunity. Even without being handed this subject homophobia was at its height, perhaps as a reaction against the demands for equality which had grown louder  - and Thatcher's odious Section 28, which criminalised 'promoting' homosexuality in schools, was still just around the corner. Yet all that is not really reflected in this mining community. Despite most of them having  strong socialist leanings, I'd guess from my own experience that most trade union members would not have extended equality to gays, let alone any extension of the then restricted 'tolerance' (the age of consent for gay men was still 21). But that doesn't seem to be the case in this film when from the outset many of the Welsh locals are shown as being vocally supportive.

Among the seven or eight gay activists portrayed here one or two are verging on stereotype (including the goth-like lesbian), which may or may not be accurate.

It's an interesting film (a little too long at two hours), only a bit preachy but definitely enlightening for people like me who didn't know about the episode. (Archive TV footage played does reveal that the story did, in fact, hit the national news at one point)
It's good fun at times but it didn't quite succeed in carrying me along gleefully as much as it did for some of the reviewers whom I've heard and read. Comparisons have been made with 'The Full Monty' but to my mind that was a better film.