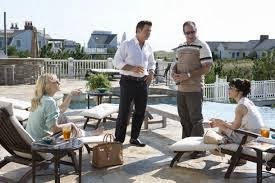 This will be a very strong contender for my 'film of the year'. It not only slips with ease into a list of Woody Allen's best ever but it surely finds its place among the top reaches of those select choices. I can't imagine many of his fans being disappointed, and it should well please a goodly number of those who are less enthusiastic about his works.

Cate Blanchett is absolutely extraordinary in the title role. I've always liked her but found something just a little bit held back in her appearances so far. Here she lets rip devastatingly as the high-flying, New York socialite who comes down with a bump when her affluent husband, who denies her nothing (Alec Baldwin, very good), is finally called to account for his embezzlements and tax evasions, the source of his wealth.  She then goes west to stay with her adoptive sister - who has also lost money in investing in one of the husband's criminal schemes - (Sally Hawkins, also in superb, convincing form) - but she cannot, and is unwilling to, shed her snobbery, including a disdain for having to work to earn her living. With frequent use of tranquillisers and alcohol as props, it's not long before she's expressing a barely-veiled snootiness towards Hawkins' more lowly, working-class lifestyle, with a reluctant, gritted-teeth tolerance of her two young sons, as well as downright disapproval for her sister's choice in men. Her regular tendency to talk aloud to herself in public is one of her more disturbing characteristics - but that's something we've all found ourselves doing now and again, right?.
The action flits back and forth between New York in the past when everything was going swimmingly and Hawkins and her then partner were visiting, they having to endure a conspicuous lack of warmth in their welcome there from the wealthy pair - and San Francisco in the present, with Blanchett still not relinquishing  her haughty, pre-'crash' social attitudes.
When Blanchett starts receiving the flattering attentions of well-monied Peter Sarsgaard she espies a possibility of release from her financial woes and weaves a web of outrageously blatant lies regarding her present situation in order to entrap him, including hiding her estrangement with her own grown-up son.
Sexual infidelities on a number of sides also figure up-front in this tale, all depicted totally convincingly.

Never dull for one moment, the film fairly zips along. One doesn't know what's coming next and I was more than eager to find out. In the script there are a few very funny, pure Woody Allen one-liners, but it's basically a 'serious' film.
Near the start I was at first a bit anxious about the constant unannounced flicking between past and present, but not for long. Even though the chronology changes are not signalled  it's quite easy to determine where we are. Besides the visual contrast between N.Y. and S.F. offers its own elucidation.
Apart from the director/writer, most of the plaudits ought to go to Cate Blanchett in a role that must have been truly exhausting to perform. She's never been better.