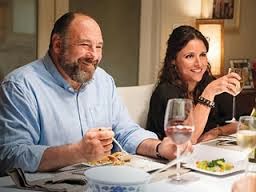 The predictable question to ask is: "Does knowing that this was James Gandolfini's last but one completed film make one more favourably disposed to it than would otherwise have been the case?" My answer is "Emphatically not!". I'd have found this screenplay to have the potential to be a delightful film with any cast - though here they are all uniformly excellent. Moreover, it's assuredly secured a place as one of my 'films of the year.' One of the 'invisible stars' was the script, which I found alert, intelligent and believable, without being too contrived or too glib.

I knew the names of neither main star Julia Louis-Dreyfus nor of director Nicole Holofcener before now, though I see they've both done substantial TV work. Toni Collette affords solid support as Louis-Dreyfus' friend.

The first of these plays a travelling masseuse, a divorced mother of a teenage daughter, with, among her clients, Catherine Keener, another divorcee (also with teenage daughter) and who, during her sessions, offloads her negative opinions about her ex. Keener listens sympathetically, not realising for quite some time that this 'ex'  also happens to be the guy (Gandolfini) whom she herself is currently dating, they having met up earlier at a social function and 'clicked'. (Okay, a co-incidence too far, maybe, but this is meant to be a light-hearted story.) When the revelation dawns on her she tries to juggle both her client-friend and her man-friend without wishing to betray what she's found out to either of them, probing each to elaborate on their opinions of the other.

It's a gentle rom-com, small-scale but very agreeable. Without any genuine laugh-aloud moments (at least for me, though there were some occasional guffaws among the audience), it's rather one of those aimiable, feel-good films, and on those terms alone it works a treat.

I find it hard to find fault with this film. I could have done without the insertion of a song on the soundtrack towards the end (but that's one of my perpetual bug-bears) and if the very close comes near to swimming in sentimentality it doesn't last so long as to drown in it.
If this had actually turned out to be Gandolfini's very final screen appearance it would surely have done him proud.