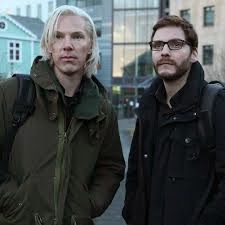 Julian Assange's condemnation of this film, based on two books which, he claims, are hostile to him, has been widely reported (I'm assuming that he's watched the film) - as has his refusal to meet Benedict Cumberbatch, who portrays him.

I liked it. Frenetically-paced, it tells the story of Wikileaks from its inception right up to almost today - though Assange's ongoing self-sought sanctuary in London's Ecuadorian Embassy, and his reasons for being there, are not addressed in the body of the film and only mentioned in the film's final captions.
It's true that the rapid-fire, consecutive, short scenes doesn't give much scope for arguing the rights and wrongs of making the leaks, but all the same I found it quite an adrenalin-pumping tale (assisted by Carter Burwell's insistent-beat background score). It was also good to have the back story of some of the leaks (which most of us are familiar with), fleshed out a bit more, and I did learn a little.
I knew hardly anything at all of Assange's colleague, Daniel Bruhl, author of one of the contentious books (played capably by Daniel Domscheit-Berg) and didn't realise the extent to which the two of them were working in tandem (or is that perhaps Bruhl's own self-serving gloss?). It's only towards the very end of the film that we are shown their rupture of their partnership and what caused it.
Director Bill Condon keeps the action tight and fast. There's hardly a let-up in it - hardly.

The supporting British cast includes David Thewlis (whom we don't see enough of, these days) as a reporter for 'The Guardian' and Peter Capaldi (the new Doctor Who) as that newspaper's editor.
The main American contributors, both as senior White House staff, are Laura Linney, who's fast becoming a stalwart of largely better-than-average films, and who always seems to raise the standard - as well as Stanley Tucci, who's already been a stalwart for some time.

It's really impossible to say if Assange's denouncement of the film is justified, for who knows where the truth lies? - and is there an absolute truth anyway? Of course there isn't. All I can say that the treatment here of him and his cause is not unsympathetic while not being defiantly 'pro' either. Speaking for myself, although my heart is supportive of his cause (Yeah - go for it!) my head is rather more equivocal.