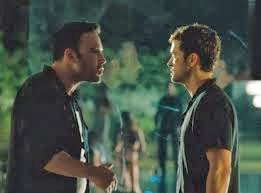 Run-of-the-mill, lazily scripted, indifferently acted 'thriller' featuring Justin Timberlake as hard-done-by, on-line student gambler who loses lots of money in one go to Costa Rica-based casino king Ben Affleck. Convinced that he was cheated, he decides to go and face down the latter himself. Bringing Affleck to justice gets him involved in shady shenanigans, playing the law (with a good dose of predictable corruption) against the casino world.
Gemma Arterton provides the regulation female 'decoration'.

Can't really be bothered to put in the effort say much more (rather like the film-makers), except to mention that we've seen it all before, but handled with more imagination and aplomb. Yet there's also nothing here to take really exceptional dislike to either,..............4/10.
Posted by Raybeard at 08:49