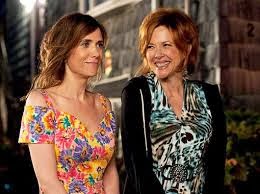 I might have disregarded this one ( USA release in 2012) were it not that it features Annette Bening in one of the main  roles.
Confession time: Ever since she first caught my attention in 'Valmont' (1989) I've had a sort of 'filial crush' on her, even though she's actually 12 years younger than me. Hope that that doesn't sound too creepy but it's only a fantasy to see her as a mother-figure. Anyway, wouldn't want anyone to get the idea that she 'puts lead in my pencil.'

This film almost turned into a happy discovery - almost!
Kirsten Wiig, so good and funny in 'Bridesmaids' two years ago, more or less reprises that Jennifer Aniston-like persona, down to the latter's mannerisms and even her voice.
She plays an unsuccessful writer spurned by her magazine employer despite winning approvals in writing circles. Circumstances compel her to return to living with her mother and younger brother, she and her crustacean-obsessed bro believing the lie that their father had died. Moving in she finds her slightly dotty, gambling-addicted mum (Bening) having not only let out her room to a male lodger but the mother has also taken in her younger new boyfriend (Matt Dillon, who doesn't have that much to do in the film.)

I really laughed a lot during this first part. The humour may be somewhat self-regarding but I was still amused. I was just thinking that some might think this film rather like an extended episode of one of the classic American TV comedy series, when up pops Wiig in her F.R.I.E.N.D.S. sports shirt.
Up to this point I was seriously thinking that I might end up by marking this film higher than yesterday's. Then comedy started to take a back seat and Wiig's romantic interest came to the fore - and Bening virtually drops out for going on hour. The story also follows Wiig and her brother's search for their father, whom they now know to be alive. (The veteran Bob Balaban, always a pleasure to see. Did you know that in 1969's 'Midnight Cowboy', he played the tiny role of the gay student who sucks impecunious [and now anti-equal marriage] Jon Voight in a cinema?)