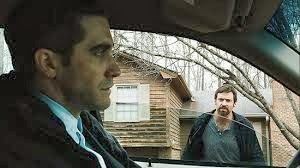 If I'd known that this was going to be as harrowing as I actually found it I might well have had second thoughts about going. I guessed that it wasn't going to be comfortable viewing but after two and a half hours it felt like having been put emotionally through the wringer.
My receptivity wasn't helped one bit by the very opening scene, being the clearly real shooting of a deer in a wood, and then a bit later by seeing a dog hoisted up by its collar and allowed to dangle, though only for a few seconds, but obviously in distress. Neither of these acts was absolutely essential to the film. So anyone who shares my sensitivities in this area might care to take note. (Coincidentally, just before going into the cinema, I witnessed a scruffy-looking chap, who may well have been the worse for drink, wth a dog on a string walking in front of him, which he yanked violently back, shouting at it, making the dog cower and look up to its master with frightened eyes. {Of course, as we all know, dogs can understand every word of their master's language!} I do so hate to see that. I always want to go up to the abusive person and ask if I can have the poor creature to bring home with me. So that put me in an unfortunate state of mind before the film even began.)

The story concerns the baffling disappearance of two girls, one six years old, the other slightly older, while playing together outside during the visit of one pair of parents (father, Hugh Jackman, a religious-orientated being with a most unfetching beard) to their friends.
Jake Gyllenhall is the detective who takes the case. When the chief suspect is released because of lack of evidence (this is near the start of the film so, hopefully, not a spoiler) Jackman, on a short fuse (understandably in the circumstances) decides to act on his own. Revealing further than that would be a spoiler.
Gyllenhall appears to be more level-headed but. as his frustration mounts, he turns out to be something of a simmering volcano. Both these main stars are in superb form. I've never seen Jackman 'losing it' to the extent that he does here.

There are a number of effective suspenseful moments, some very violent scenes with a grisly measure of gore - and, while we were being kept in the dark as to what actually did happen to the girls for almost the entire time, I didn't foresee the solution to the conundrum.

Even more than with some of the films I evaluate I think my rating for this film will reflect my own reaction which included a fair degree of discomfort - generally rather than relating to the specific instances I've mentioned, which are individual and personal. As a thriller delivering the goods it certainly passes muster. I'll give it............7/10.
Posted by Raybeard at 09:29