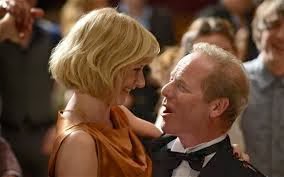 Based on songs of the singing Reid twins, 'The Proclaimers', I wasn't even aware that this had already been a 'successful' stage musical. Also, as having known only three or four of the songs, the ones that were the duo's most famous hits, maybe I'm not best placed to call judgment. However, I offer my reaction to 'Leith' as a film.

Mention has to be made of the photography. I don't think I've ever seen Edinburgh look so glorious, both by day and by night. Rather than fleeting glimpses, I wish there'd been one or two more longer scenes with a panoramic city backdrop on which one could feast one's eyes. (I've been there just twice, the last being way back in 1981, and both times were for the Festival, hardly ideal for seeing it at its best or most everyday typical.)

This story involves two young army buddies returning home to Edinburgh after a stint of duty in Afghanistan. They return to their respective fiancees, one of them living again with his parents, the always dependable Peter Mullen and Jane Horrocks (the latter's Scottish accent sounding uncannily dead on target - but then ever since 'Little Voice' we've known that she can work miracles with that voice of hers.)
Director, Felix Dexter, whom I've known mainly as an actor for decades, does a good job behind the camera. (Early screen appearances include 'Baby Face' in Alan Parker's 'Bugsy Malone' [1976] as well as  in Derek Jarman's 'Caravaggio' [1986] )  I'm told that it was he making a brief, dimly-lit appearance as an inebriated pub customer exiting onto the street, glass in hand, and making his presence.....'heard'.
Oh, and near the start of the film, if you blink you may well miss the composing brothers themselves coming out of the same pub, in daylight this time.

All the upbeat songs are great fun and choreographed with a big heart - and that is the way the film itself is for the first half. A couple of the earlier songs are set in a pub - 'Let's Get Married' is particularly well accomplished, with one Michael Keat almost stealing the show as the barman. A later one with Jason Flemyng, surprisingly good at singing and dancing (well, a bit), was nearly another show-stopper.

But it takes an emotional dive into ultra-seriousness half-way, for both the young couples as well as for the parents, each with their own issues to resolve or overcome (I didn't quite get what had happened between the older pair). Here I found it did start to drag, providing longueurs which left me craving for another chirpy song and dance, though having to wait it out right until the kind of flash-mob finale arrived. But when it did come it was certainly very exhilarating.

I felt the film was a mixed success. All the acting could hardly be faulted. Most of the singing was high standard too, and most of the songs held their own. I was half-expecting Peter Mullen to growl through his lyrics but he managed quite a creditable effort. I think I was most uneasy with the great gulf of contrast between high-spirits and emotional lows. I realise that stories do need some grit to keep the audience interested but it didn't quite gell for me here. But that's my only really serious quibble, otherwise it's pretty good fun, on the whole.
Having thought about it overnight, I can't quite explain why, in view of the positive things I say about the film, I haven't given it a higher rating. The failure to meld the happy and the downbeat is, for me, the heart of the difficulty. I think other musicals manage it better, though that's not to say that there isn't a lot to enjoy here.
I think in terms of overall satisfaction a fair rating would be.............................6.5
Posted by Raybeard at 12:33