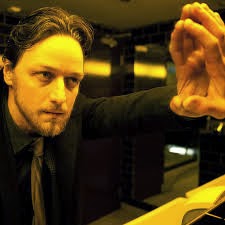 The second Edinburgh-located film in less than a week. That's not too many, though in this one there's hardly anything to see that most might recognise.
Very violent, abounding in swearing, loads of cross-cutting with very few scenes lasting longer than two minutes, this wild and busy film has so many times been compared with 'Trainspotting' (like this film,  from author Irvine Welsh), and always unfavourably, as far as I've seen. But it would be mistaken to dismiss 'Filth' completely, in my opinion.

James McAvoy plays a coke-snorting, pill-popping, heavy drinking, thieving, lying, cheating detective-sergeant who's been separated from his wife and child and who's hell bent on achieving promotion above his rivals. He's one who gives 'corruption' a bad name. He'll stop at absolutely nothing to procure his rise. From the outset he plans to discredit the other potentials by any foul means he can devise, including, in one case, constructing a multi-layered scenario to make the others think that one of them is gay, a big no-no for his more mature, but just as homophobic boss (played, interestingly, by openly gay Scottish actor, John Sessions) who regards with horror the thought of one of his senior officers possessing 'non-traditional' values.
By McAvoy's similar blatant lying to the others he gets them to gang up on each in turn, and in the process has illicit and rampant sex (including a bit of S/M) not just with some of their partners but also with the wife of his (non-police) best friend, the impressively versatile Eddie Marsan, for whom he puts on a show of looking for the mystery man who's been making obscene phone calls to her. He's that very same man.
I should have said that in addition to being virulently homophobic he's also racist and rabidly mysogonistic into the bargain - but you probably guessed that that comes with the territory he inhabits.
His only moments of lucidity are when he keeps bumping into his wife and kid, yearning to be back with them again. But these intervals don't last long before he's ingesting the hallucination-inducers again.
Saying more about the story is pointless. It's all high-energy, fantasy-driven stuff, reflecting the effect on his mind of drugs and drink
Others in the cast include Jamie Bell as his close work colleague, who thinks that he's getting McAvoy's confidences, but doesn't know that he's also being duped - and Jim Broadbent in full nutty professor mode as his medical consultant. If you don't know that there's a shortish, out-of-the-blue appearance of a famous face then it's better not to spoil the surprise. (I did know, so I was looking out for him.)

Music soundtrack is incongruous throughout - Golden Oldie pop hits spanning the decades plus some very well known classical pieces, all seeming to have no connection with the action going on ('Trainspotting' had a similar feature.).

There are a number of nods to 'A Clockwork Orange', in fact so many that I was starting to count them, which became a distraction. As well as the conspicuous poster of '2001' on the boss' office wall I wondered if the film contained a general homage to Kubrick, as it also crossed my mind whether the Christmas tree was a pointer to 'Eyes Wide Shut', though maybe not. I don't see why the Kubrick connections were made. I don't imagine it's part of Welsh's source book.

Btw: I wasn't aware that the film's title is just one of the many nicknames the criminal world bestows on the police force generally, though it's hardly surprising to learn it.

I wasn't bored for an instant during this film - there's hardly any opportunity for that. Pleased I saw it but, unlike 'Trainspotting', 'Filth' (Director: Jon S. Baird) is one I'd not rush to see again nor to recommend with enthusiasm - and it's definitely not one for the faint-hearted...............6.