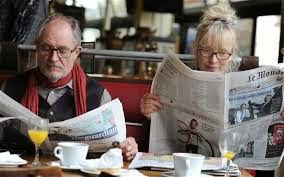 After yesterday's raspberry of a film I was counting on a feature to redeem my belief in good cinema - and, happy to report, this largely fulfils that need.

Virtually a two-actor piece, Jim Broadbent as college professor and his teacher wife, Lindsay Duncan, go off to Paris to mark their 30th wedding anniversary, though their relationship has long gone off the boil. They live together alone, their children having grown up and flown the nest.
While Broadbent's mental state is essentially one of sexual frustration, as Duncan has put her body more or less off-limits to his advances, her attitude to him is one of barely concealed loathing, only broken by the occasional superficial frolicking and lovey-doveyness, as it's plain that she longs after something more to their marriage. Her put-downs and teasing of Broadbent are horribly cruel.
In Paris they fortuitously bump into successful author, Jeff Goldblum, a former colleague of Broadbent, who invites them to a social gathering in his plush flat, which occasions a devastatingly honest climactic scene involving the married couple.

One of the things I most like about this is that those films which have a bickering married couple at the centre of attention are quite rare for a serious film. There are certainly plenty of comedies where a fractious relationship is the main focus, but not so many husband-wife dramas as a feature film - and, even rarer to see, is the portrayal of a couple who are approaching old age. What is more, this pair is interesting. I never knew what they were going to say to one another next, just waiting for a snappish remark to give away the underlying truth of their stale relationship.
Which leads me to give well-deserved praise to writer Hanif Kureishi ('My Beautiful Laundrette' [Goodness, all of 28 years ago!],  'The Buddha of Suburbia' and 'Venus'). All the dialogue, at least that which I could hear, had significance, something many screenplay writers would do well to note.
Director Roger Michell ('Notting Hill'. 'Venus' [again] and a recent one [best left forgotten, maybe] 'Hyde Park on Hudson') coaxes a very fine performance from Broadbent, but Duncan is just extraordinary. I've never seen her till now in such a central role and this is really her film.

But now for the quibbles. As I hint above, the most serious one is in the dialogue. Duncan delivers a significant number of her lines not just under-the-breath but a few of them are merely mouthed without any vocalisation at all. This is a shame as everything that I can hear is essential to depicting the truth of the relationship. I don't want to be left guessing as to what it is that Broadbent is reacting to. Sorry, but we're not all so adept at lip-reading.
Another pity, though less of a deep trouble, was the film's falling into the trap of cliche on the soundtrack. I'd have expected something more than banalities from Michell. We get not only accordian music, for heaven's sake, but also a couple of snatches from 'Clair de Lune' as well. However, for the most part it's jazz - because, you see, Paris = cool sophistication (just in case you didn't know).
There are, mainly near the start, very short views of touristy attractions - L'Arc, L'Opera, Place de le Concorde - and (would you credit it?), yes - La Tour itself! (Actually the couple's hotel balcony view.).
The photography is done throughout in very subdued colours. At no time do we see anything garish. In fact much of the film is set at night.

I liked this film a lot, but feel it ought to have been even better. And that could easily have been achieved by the little tweak of increasing the audibilty of Duncan's words. Great pity that.