Film: 'THE LOOK OF LOVE' 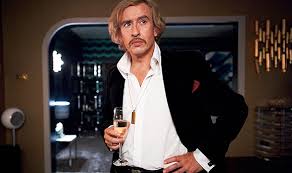 In the light of a number of indifferent, or even hostile, reviews I might have given this film a miss were it not that the central character of Paul Raymond, the Soho-based 'porn-impresario' is played by Steve Coogan, whom I like. It's been said that some of his 'Alan Partridge' character, which I think very amusing, had gone into this interpretation. There was a little smattering of that, but I have to say that on the whole I agree with the general tenor of the thumbs-down reviews.

Tracing his career from the 1960s to the 90s when he became, it is claimed, the 'wealthiest man in Great Britain', the film is an extended flashback of his success as seen by the aged sex-industry mogul himself, having just undergone a shattering personal tragedy.
There is no real salacious content to the film, but that is very much a reflection of the fact that hard-core pornography, in whatever form (even photographs for personal 'use') through most of the period chronicled was totally illegal - though what went on 'underground' is hardly addressed at all. Having said that, for those who like that sort of thing, there are some glimpses of unadorned female pudenda and mammary glands, though I would hardly think they'd be adequate enough to engender 'stimulation' in the heterosexual male. Let it be known, however, I am hardly an authority on that particular subject!
I think the weakness of the film is that Paul Raymond is essentially a dull character. He's certainly not sympathetic but neither is he quite repellant enough to be an 'anti-hero' who might have given rise to one wanting to know what's going to happen to him next. Both his wife (Anna Friel) and his tragically coke-addicted daughter (Imogen Poots, splendid here) are much more interesting, feisty characters.

During the course of this film I found my mind wandering onto other non-related matters more often than I usually do. Even when we see Raymond distraught, especially at the end, I found myself strangely unmoved by his plight. It's true that others have felt kindlier towards the film than I have, but I think they'll be in a minority. In my opinion it could and ought to have been better in depicting a man who had such a glitzy and eventful life.