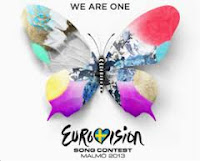 The most annoyingly-enjoyable, gloriously-silly TV event of the year kicked off last night. The first semi-final, choosing ten of sixteen hopefuls to go into Saturday's final. (Second semi is tomorrow night). 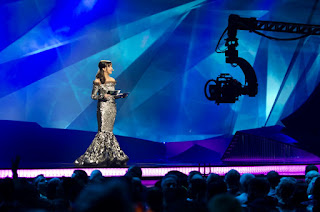 Hosted by this Swedish lady in mermaid-type shiny dress, for which I think even Mae West might have bothered to peel a grape. 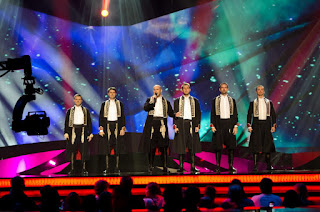 So far, this year has lacked any prominent eye-candy for me. This Croatian group in national dress (including shiny knee-high boots), didn't garner enough votes to make Sat's final. 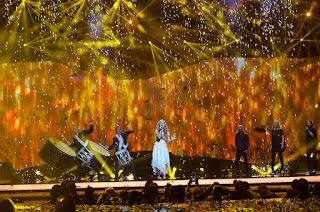 Denmark is the current overall favourite to win, singing (complete with little drummer boys) something about teardrops, with floaty things dropping from the ceiling as though they were already celebrating victory. The cheek of it! I didn't think the song was anything extra-special - but who am I to judge? It's been a VERY long time since what I thought was the best song managed to win. 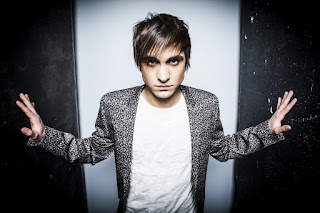 Belgium's 18 year-old winner of that country's 'The Voice' TV talent show sang a reasonably appealing punchy song, 'Love Kills'. (He could turn into a hottie - when he grows up!) 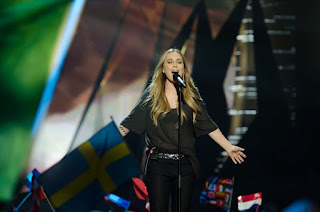 I cast my own telephone vote for The Netherlands. So different from all the rest, a rather dour song called 'Birds', but sung straight and refreshingly free of gimmicks. It's that country's first achieving the finals after eight consecutive years of failure to get there. Should have a reasonable chance of finishing high-ish.


This was very much a 'first-impressions-count' vote. In fact the only one of the songs I've heard so far is the U.K.entry - Bonnie Tyler, she of the raspy voice and of 'Total Eclipse of the Heart' fame. She qualifies for automatic entry on Saturday night, along with France, Germany, Spain and Italy, because of those countries' major contribution to the event's costs - as well as with Sweden, last year's winner.

In last night's vote not one of the countries making up the former Yugolsavia made it to the finals, yet all the states which comprised parts of the former U.S.S.R. did make it. Very strange, though I don't suspect any foul play - but that doesn't mean suspicious goings-on never takes place.
Quietly pleased that Cyprus didn't get to the final. Their always giving maximum points to Greece - and vice versa - year after year after year, irrespective of the quality of the other's song, was just too silly to take seriously.

So that's Stage One over. Got to go through it all again tomorrow night. And then, Saturday - the one night in the year when I allow myself to stay up until after 11 p.m.  Oh, what excitement in store!