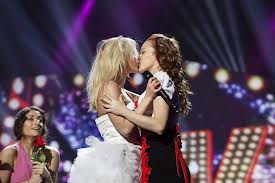 On the whole, more entertaining than the first part, this year may go down as the contest which included an exultation of equal marriage - Finland's entry with a 'bride' enthusiastically chirping "Marry me!", only at the end of the act to clinch it with a full female-on-female kiss. Marvellous! - even though the song itself was nothing special. But it's got through to tomorrow's final. 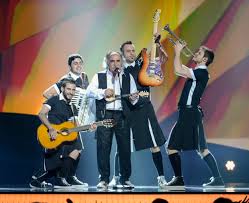 Any slight regret about the first semi displaying a lack of 'hottie-ness' was dispelled by the Greek entry which also made it to the final -  a group called 'Cosa Nostra', cavorting around in kilts while fool-dancing to a ridiculous, disposable, raucous song, "Alcohol is Free!" . If it wins I'll be a monkey's uncle! Though having said that, I still can't understand how hard-rock act 'Lordy' of Finland, performing in rubber monster suits, won the title a few years ago.
The combined testosterone level of this Greek act (well, from at least three of its members) made up for any lack elsewhere. Very satisfying indeed! 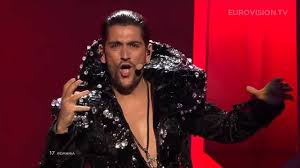 I'm glad I didn't have an inkling of what was in store from Romania's brave entry. One had to hear it to believe it. It's also through - and the song wasn't bad either. 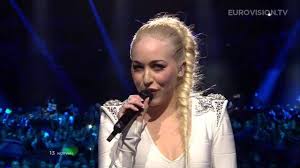 The surprise of the evening for me (as opposed to 'shock' - pleasant or otherwise) came from Norway - a sober song sung by one of several acts consisting of a single lady in a white dress, but a song I found highly appealing. A strong entry to actually listen to without any visual distractions. 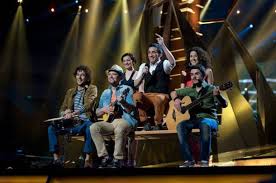 But, when it came to declaring oneself, if we Brits had been allowed to vote in this second part, I think I would have cast mine for Malta, with its simple, cheery ditty. Hardly outstanding and unlikely to linger around once the competition is over - but pleasant to listen to and delivered with gentle, radiant optimism.

Okay, now that I've heard all the songs at least once (apart from France, Germany, Italy and Spain, who did not participate in the semis, though I'll correct that omission before tomorrow's final), on second hearing tomorrow night my opinion may well shift. But as at now I think I'd give my overall vote to the Netherlands. If my own vote concurs with the actual result it will be the first time it's happened for decades! Let's see what transpires.