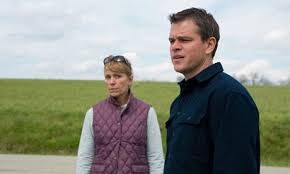 Matt Damon and Gus van Sant working together again in this rather underwhelming feature about representatives (Damon and Frances McDormand) of a natural gas company attempting to convince the residents of a small town of the benefits which allowing fracking on their land will bring them. Their attempts are stymied by an 'environmentalist' played by the not-bad-looking John Krasinski who, along with Damon himself, is the screenplay's co-writer.

The film does have its moments but they are sparse - including one major 'surprise' in the denouement which, untypically for me, I did see coming about five minutes before it was revealed.
In spite of the big, open spaces portrayed and the huge industry involved it's a small scale drama. Its green 'credentials' were, I thought, subsumed by an onrush of sentiment towards the end, Damon playing his anguish up to the hilt. Performances generally were satisfactory, in my opinion - though, apart from the concluding minutes, there's virtually no  scope for deep emotions and grand gesturing.
Incidentally, Frances Mc Dormand, whom I love to see in any film, looking painfully thin here, so much so that I've looked on the web to see if there's any mention of her having some ailing condition, but can't see anything.