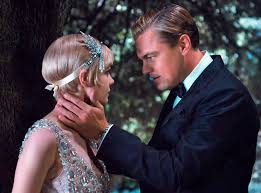 In 1974, when I first saw the Jack Clayton version, I had not yet read the novel. My impression then was that Robert Redford was portraying a sympathetic, yet misunderstood, character. Then I did read the book (and again at least twice more since) and discovered that the Gatsby persona is much more complex and questionable. In this new film DiCaprio captures his shifty and shady aspect perfectly, a facet which is obvious from near the very start, and soon afterwards revealed explicitly to be so.


Baz Luhrmann applies his trademark frenetic visuals as though playing to an audience suffering from attention deficiency syndrome. Everything is busy, busy, busy - completely at odds with the spirit of the short novel which, though it can be read comfortably in a single sitting, is rich and languid in temperament, consisting of beautifully structured prose, best enjoyed when gently savoured and pondered over. Not for nothing is it regarded as one of the peaks of western literature, some going so far as to maintain, not without some justification, that it's possibly the "greatest American novel ever written". Luhrmann's film seems to be based on the idea that the greatest fault a film version could have would be to bore the audience. He doesn't do that. And you know what? I really liked it!

One could go through and tick off which cast members were better in this new film than the 74 one, and vice versa, (I've never seen the 1949 Alan Ladd film) but it all comes down to personal choice. I would just say that I missed Karen Black, given a more substantial role as Myrtle in the earlier film. And then there was Joel Edgerton as Tom Buchanan in the new, sometimes looking alarmingly like Ricky Gervais! Carey Mulligan I thought was good and caught Daisy's vulnerable, flighty and troubled personality so well, very different from Mia Farrow who also was at least as good in an equally valid interpretation. Tobey Maguire as the colourless narrator was okay, but it's a rather thankless part. Why he had to narrate the entire film as a reminiscence, several years on, of a recovering alcoholic was, I think, a misjudgment, giving an unnecessary and distracting weight to a character who is essentially merely functional as a witness to the Gatsby/Daisy saga. It must have been some notion of connecting that character with the tragic reality of Scott Fitzgerald's own later,  alcohol-heavy life.
I'm not sure I cared for the frequent appearance of Fitzgerald's actual words on screen. I suppose it was as a kind of homage to the source work. It seemed needless when a huge proportion of the dialogue came straight from the novel anyway - but, not only that, I also became extra-conscious of those parts of the dialogue that had not made it into the final script. Several times I was waiting for certain lines to come up which had been lodged in my memory, but which just weren't to be voiced at all.
There are only a very  few extended scenes in the film. One of them, the longest, and near the film's end, is absolutely electric - the final confrontation between Gatsby and Buchanan, with Daisy, Carraway and Jordan looking on in utter horror as it inexorably escalates.

The music anachronisms didn't worry me so much (including the fact that Gershwin's 'Rhapsody in Blue' was actually composed shortly after the 1922 setting of the film/novel - I wouldn't have known that myself had I not read it!) but it's all par for the course with any Baz Luhrmann film.

Some of the reviews I've read have been openly hostile to this film, essentially on the grounds that its spirit is so far removed from the author's intentions. Although I agree with that, I must say that as a film I think it can more than stand on its own feet. As an entertainment in its own right I'm going to award this version of 'The Great Gatsby' a satisfyingly hefty........................7.5