Film: 'THE EYE OF THE STORM' 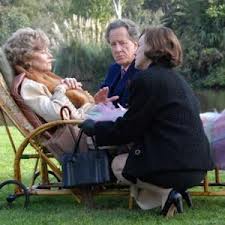 This 2011 Fred Schepisi film, only now given a limited cinema release here, is based on a novel of Australian novelist Patrick White, of whom I am an admirer, though I've not read this one of his. I found it a film where the focus of the story seemed to be running away from my grasp. The more I tried to get in tune with where it was going, the further out of reach it seemed to recede. This was exactly the feeling I had when I first saw the 1985 Meryl Streep film, 'Plenty' - which I later got to like a lot. It hit me during the course of this film that the same director was responsible for both films.

This boasts a starry trio of principal roles - Charlotte Rampling as the aristocratic, bed-ridden, senility-approaching, widowed mother to Geoffrey Rush and Judy Davis. (Both women are particular good).
Set in and around Sydney, the photography is ravishing. Rampling (actually only a very few years older than the actors playing her son and daughter) convincingly portrays the mother fully aware of her approaching end, and determined to die only when she ordains it. She has no obvious physical ailment apart from the normal ageing process. Her children visit her palatial home where she's lived all her life and their talk to her is of encouragement and a denial of facing reality. But she knows how things stand. There are significant flashbacks to a younger Rampling, some with Judy Davis, revealing a long-standing prickly relationship between them. The principal complications in the main story come from the female nurses, and their conflicts between professional loyalty to their patient and emotional involvement, one of them with Rush's character.

It was about half-way through this two-hour film that I felt I was starting to 'get it' - and from that point on I could sit back and enjoy it more. I'd class it as a 'challenging film'. Worth seeing, definitely - and unusual too. I wonder if on a second watching my opinion will change (For 'Plenty', seeing it again resulted in increased regard for that film.). I think my view will improve and on that expectation I'll award this film a...............6.5