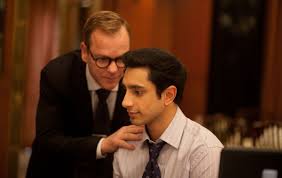 Mohsin Hamid's celebrated 2007 novel has been at the very top of my 'must-read' list since it attained internationally highly praised 'buzz' shortly after its publication. I've been waiting to pick it up somewhere second-hand ever since, with no luck yet. (Yes, I know of 'Amazon', but that particular body is a dirty word over here right now because of the contentious issue of its avoiding paying British tax.)

Riz Ahmed plays an ambitious, western-leaning, Pakistani financier who emigrates to New York and is taken on as high-flying executive by a scarily-demanding, but supportive, Wall Street boss. (Kiefer Sutherland, good). Then 9/11 happens and he's forced to confront the question of where his true allegiance lies - assisted by what he experiences as the heavy-handed attitude of police, airport security, as well as public opprobium, all arising from his physical looks. Back in Pakistan for a wedding he is introduced to a certain Muslim 'spokesman' who wishes him to declare which side he is on in the 'struggle'. His story is related in flashback as he narrates his story to a Liev Schreiber character in Lahore who is trying to locate the whereabouts of an American hostage held captive for ransom. Kate Hudson provides the romantic interest, both of them conflicted by events pulling them apart despite their mutual attraction.

I found the film completely arresting - at least from the moment of the Twin Towers attack - as well as moving and believable, leading up to a gripping climax. It performs a tightrope act of avoiding showing where its sympathies lie - and I think it succeeds. Pakistani family life and that country are well captured on camera, the director, Mira Nair, displaying her sure touch. I think the central story was so strong that it could easily have worked effectively as a linearly presented 'thriller' rather than being told in flashback - though the framing device, beginning and end (with frequent visual re-visits to the narrator), is employed to show the equally important issue of the captured American hostage.
I understand that the film's ending does not follow that of the novel, though I'd rather not know what the difference is until I read it myself.