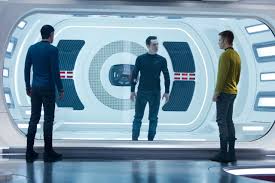 Not much to say about this.
I've seen all the Star Trek films at the cinema though I've never been a fan - and never even sat through an entire episode of any of the TV series. But I would marginally rather watch a Star Trek film than one of the 'Star Wars'. The former's stories tend to have rather more human interest. However, in this film, when one takes away the fortississimo soundtrack gunfights, crashes and explosions, most of which occur in airless (and therefore what ought to be soundless!) space, the basic plot-line seems fairly perfunctory. Having said that, I didn't find the film as bum-numbingly tedious as some of the previous efforts in the series. But it's really one for those who have 'bought into' the Star Trek notion - and that obviously excludes me. I'm pretty sure it would leave most hardened fans thoroughly satisfied, which is all it was really intended to do.