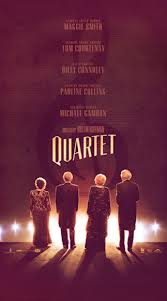 This was a most agreeable start to my film-viewing year - something I wasn't expecting one little bit! It's Dustin Hoffman's first venture into feature film directing, and one of which he has every right to be pleased, even proud.

A quintessentially English tale (though the subject could be pretty well universal) by the veteran British playwright, Ronald Harwood and based on his stage play, performed with a stalwart, stellar, and entirely British cast.
The 'quartet' of the title refers to four former opera-singer residents of a largish home for retired musicians, while the impetus of the story arises from their wishing (or otherwise) to perform together a quartet from 'Rigoletto' in a small-scale concert at the home to commemorate Verdi's birthday.

The cast is uniformly first-class, as one might expect, but Billy Connolly deserves special mention for his mischievous twinkling and impish humour - while Maggie Smith (is there no getting away from that woman?), as the 'fly-in-the-ointment' late arrival at the home, shows just why she is such a very good actress, conveying both depths and subtle switches of emotion with no more than a pursed lip, or the raising of an eyebrow or a slightly altered tone of voice.

I was dreading all the 'old people' cliches - bitching among themselves, cantankerous exchanges, toilet functions, the residents being patronised by the younger members of staff etc. There is certainly the first three of these but it's all carried off without appearing over-hackneyed. Must confess that I wasn't particularly looking forward to this film, being one of several in recent months which has had aged people in central roles. Given my own years it's a subject I don't want to have my nose rubbed into, so it was with some surprise to find that I was enjoying it so much. (The dialogue in particular needs commending. It's a first-rate screenplay.)
An added bonus for me was that I hadn't realise that one of the smaller roles is taken by none other than the Dame Gwyneth Jones, whom I've seen a few times on the operatic stage, the last occasion being when she sang the title role in 'Turandot' at Covent Garden in the early 90's. Although I've never actually met her in person, she is, or was, an acquaintance of a gay friend with whom I still have contact. Must ask him if he knew that she was going to be in this film. She has a small speaking role but near the end of the film, at this concert, she's allowed to sing a truncated version of a particular well-known aria (I'm not saying which!)