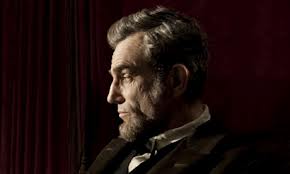 Impressive.     As a very dialogue-driven film it risked being rambling, stodgy, monotonous or over-polemic. It turns out to be none of these. In my view this is possibly Spielberg's best film from his more recent offerings, only on a couple of occasions teetering on the edge of sentimental wallowing (for me the bane of too many of his films) but in this case never quite going over.

Concentrating almost entirely on a few weeks at the start of 1865 as Lincoln and his close circle attempt to pass the Constitution's slavery-abolishing amendment, and his fight to acquire the necessary effective votes in the Senate (by cajolery, promises and bribes), it does not shy away from depicting his motivations and anguish in prolonging the Civil War and its painful statistics of casualties, by refusing to compromise. Despite the film's title it is neither a hagiography and even less of a biography, but by capturing a short slot of time in his career (admittedly the most significant one) it does manage a totally convincing multi-dimensional portrayal of the man.

Acting throughout is of a very high order indeed. I shan't feel any of her rivals has been cheated if Sally Field picks up the Bafta and Oscar awards for her role as the self-willed but dutiful Mrs L. Similar recognition ought to be due to Tommy Lee Jones. One should not overlook Tony Kushner's superior screenplay too.  However, if Daniel D-L does not win his it will be a travesty, but he surely will. (Is there anything this man cannot do?)