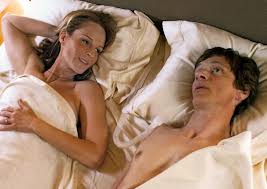 Despite its unimaginative title this is a decent enough film - sporadically engaging, even sometimes charming, but not one that'll lodge in my memory for a long time.

Set in 1988, and based on the true story of a 38 year old man, a quadraplegic after contracting polio in childhood, who has to spend several hours a day in an 'iron lung'. (I didn't know that they still had these things. I always associate them with the 1950s and prior times, and had assumed that, by now, they might have been succeeded by another, more effective, method of treatment.)

The paralysed Mark wishes finally to lose his virginity - and, more specifically, to have penetrative sex for the first time - and he hires, for this purpose, a sort of sex-therapist surrogate. (Another thing I've learnt - I didn't know such people existed). Without even a blink, she takes on the 'task' of giving him his first experience. For me, Helen Hunt, in this role, carries the film. (We also see a couple of full-frontals of her - for those who like that sort of thing).
Then there's also the always reliable William H.Macy as a sympathetic R.C. priest - sporting some alarming, shoulder-length hair.

The film's principal point of interest is Mark's yearning for emotional involvement while his hired surrogate tries to maintain a professional distance, (she has a husband and son), causing her predictable feelings of guilt and pain.