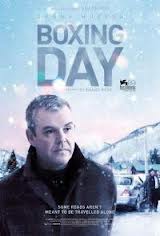 This was an unanticipated pleasure. A film of which I hadn't heard and one which gets, as at today, an average rating of just 5.4 on the IMDb site, by just 22 viewers. I would not concur!

Apparently based on a story by Tolstoy, it tells of an increasingly fractious few hours between the Danny Huston character (who earns a living profiteering from purchasing repossessed, occupier-evicted properties at knock-down prices and re-selling them on) and his English driver-companion (Matthew Jacobs - a name with which I'm unfamiliar).
The bulk of the slightly over 90 mins deals with these two characters alone, who take an unstated dislike to each other almost instantly on their initial meeting (when the driver cannot get his car's SatNav started), their subsequent needling each other constantly while trying to keep a lid on their antagonism, with real feelings seething underneath. When his driver discovers what his 'boss' does for a living he cannot restrain himself from voicing his disapproval. Their enforced reluctant companionship culminates in their being stranded together at night in the snowy peaks of Colorado in the depths of Winter.

I thought it was well-acted (particularly Huston), beautifully photographed, finely observed, a strong script and some very funny moments - even though, all in all, it's not really a full-out 'comedy' as such. The ending too was unexpected. It gets from me a well-deserved.................7/10