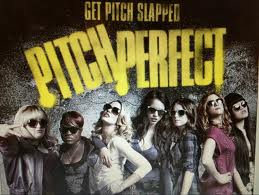 I might have given this film a wide berth had it not been for reviews talking about an oblique kind of humour, and that was enough to sell it to me. As it turned out, it wasn't quite as edgy or as quirky as I'd hoped, though it was by no means a waste of time and money.

It concerns an a capella female group at an American university aiming for an annual title, their previous year's attempt having been thwarted by a gross-out, mid-performance 'accident' by one of their members. Their main rivals are a similarly-numbered male group. (Cue - M/F rivalries, romantic links, suspicions of 'betrayals' and so on.) All the musical stagings are done with distinct verve, even exhileratingly so, though it's not until the very end in the final competition that we get to see a number performed complete and without interruption. Throughout the film all the acts (and there a satisfying number of them) consist of medleys of pop hits of very recent decades.

I don't think I winced at the antics on screen even once, which is really saying something, considering the ages of the main characters. The musical numbers certainly gave the film a lift, but in between them, the storyline was of no more than very moderate interest, though not being exactly vacuous either.

Not greatly disappointing then, though maybe my hopes had been just a wee bit too high........6/10 would be fair.