Film: 'IN LOVE WITH ALMA COGAN' 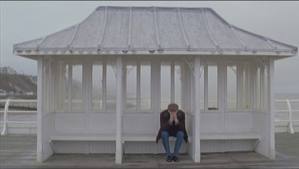 Drawn to this 2011 film by the name in the title (for more about that major British singing star of the 1950s, see below), I went along hoping that it might be one of those ignored little gems which is only appreciated for its worth when word gets around. Unrealised hopes, alas.
Maybe I should have 'read the runes' in that it had only got a very selected theatrical release and I caught it at a one-off 11 a.m. screening for 'Senior Citizens', many of whom, being of my generation and older, could well have been attracted by the title as I had been.

Modestly budgeted, quintessentially British production, with no really big names to be recognised outside the world of British TV (though John Hurt has a cameo five minute appearance near the start), it's directed and written by Tony Britten, another veteran TV (and one-time classical theatre) actor who also wrote the music soundtrack (Very 'in-your-face'!).
It concerns the aged owner of an end-of-the-pier theatre in one of our English resorts (Cromer, Norfolk), struggling to come up with ideas to keep it alive and viable during the Winter months, while financial bodies are breathing down his neck. After a number of duff ideas someone comes up with an imitation-tribute act to Alma Cogan (died 1966), on whom he'd not only had a teenage crush but actually, for a few brief moments, took it further - and has been obsessing over her for all his life since. (The girl in the film who attempts this tribute-imitation bears no more than a passing resemblance to the star, which I can forgive, but she's even further away in trying to capture the distinctive voice.) There's also a tangential involvement with a criminal gang.

It could have been an interesting and captivating film but I found it rather clunky - and surprisingly, (considering that so many of the cast were veteran actors), much of the acting seemed self-consciously forced, though Keith Barron was okay.


Alma Cogan (for non-British readers and Brits too young to have known) was one of the really big British female singing stars of the mid-late 1950s, having a string of hits at the same time as Ruby Murray, Shirley Bassey and Petula Clark (the last two being still with us and still performing),  She died of cancer at the tragically young age of 34, by which time she'd been sidelined by changing fashions and the onset of rock and group-pop music. Though she did attempt to extend her regular repertoire of upbeat, chirpily optimistic songs into something more mature and sophisticated, her altered style never really caught on with the public. She'd been known as the 'Girl with a Giggle in her Voice', referring to the inserted, vocal 'catch' when she sang, which became her distinguishing gimmick. I liked her. She had a bouncy, sunny personality which always made me feel good - though what lurked underneath we were never quite sure (at that time such questions were never asked!) If she'd lived in a more enlightened era I'm pretty sure she would have had a large gay following - and she may well actually have done so in the then hidden gay underworld. Listening to her voice even now, it has a pleasantly infectious quality. 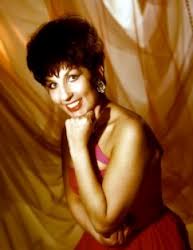