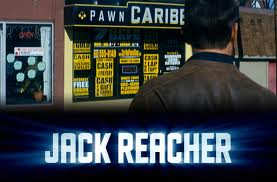 Efficient enough thriller delivering its quota of fights (both with and without guns), chases, twisty plot devices, red herrings - and all needing Tom Cruise in super-sleuth mode to solve  the mystery with jaw-dropping intuition and truly amazing powers of deduction.

Beginning with an apparently random shooting of five members of the public, this scene has acquired a heavy significance because of recent events in the U.S.A. The suspect for the shootings, in an apparently open and shut case, is soon arrested and during questioning enigmatically calls for the title character. So enters T.C. with a blurry past, which just begs for him to be distrusted. But does his being called out from obscurity deter him from trying to fathom out what exactly did happen - and to uncover the killer's motivation? No, it jolly well does not! His unerring ability to suss out the odd suspicious word, which to us mere mortals might have gone unnoticed, pays dividends - allowing him to get to the heart of the matter in time.
Stalwart actors such as Robert Duvall and Richard Jenkins add watchability to the proceedings - and it was good to see British actor David Oyelowo in a major role. Rosamund Pike acquits herself well too. And it would be perverse not to mention the curious, though welcome, brooding and powerful presence of famed director Werner Herzog who doesn't have many lines, but then he doesn't need them.