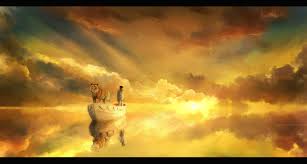 Way back in 1974, watching the Mike Nichols/George C. Scott film 'The Day of the Dolphin' got me so upset that I decided not to pay money to see another film which has any animal in a major 'role', or the depiction of any animal physically suffering, terrorised or merely in a state of anxiety - even when, nowadays, and markedly so in this particular film, many of the visuals are computer-generated. I've largely kept to that self-imposed rule in all years since then - until now.

I found watching 'Life of Pi' such an ordeal that I cannot remember how many times I averted my eyes. The only things that prevented me from leaving were that (a) this is undoubtedly a 'significant' film which really ought to be seen by any serious-minded cineaste and (b) having paid more than twice the admission fee I normally pay, in order to watch this in 3D format, I wanted to be present for at least enough of it to be able to register it as having been 'seen'. In the event I did manage to last out until the final credits.

When I did peep through my fingers (I don't mean that literally) there were moments when the imagery was simply ravishing and breath-taking. The 3D format was at least as good as it was in last year's 'Hugo', some may say even superior as in that masterpiece. There is no doubt in my mind that this film reaches the zenith of the method .
No complaints either about the acting strength of Suraj Sharma who takes the lion's(!) share of screen time - marooned alone with the tiger for most of that time. He fulfilled the role admirably.

Unfortunately the emotional intensity I felt during this film renders me pretty well incapable of making a reasonable value-judgment. If I did it would be an unfair verdict, one terribly biased by my own personal foibles. So, bearing in mind that my scores reflect not whether I considered a given film 'good', 'bad' or 'indifferent', but the extent to which I derived personal enjoyment and satisfaction from the experience, for the first time in these blogs I'm going to decline offering a rating at all. Sorry!