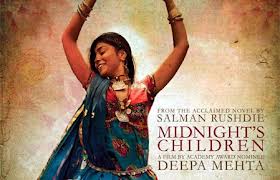 Based on his book, which I read many moons ago, Rushdie both adapts it for the screen and he himself provides the voice-over narration. So one has to assume that he is satisfied with the result.

It chronicles the life of a baby boy born to a poor couple, who is the victim, shortly after birth, of a hopelessly misguided, though well-meaning, baby-swap in a maternity ward into an affluent household. (A sort of 'Prince and the Pauper' scenario). We see the boy growing up right into his 30s - all against a backdrop of Indian independence in 1947, war with, and separation, of Pakistan and the secession from the latter of Bangladesh in the 1970s. The boy, then man, with whom he was swapped becomes his rival - the secret kept by the woman who did the swap becomes his (the upper class one's) ayah or nanny, until when he's a young man, conscience-stricken, she blurts out to his purported 'parents' what she did.

I found the whole film a very heavy experience. It's of almost epic-length (very nearly 2 1/2 hours) and is virtually entirely humourless from start to finish. I don't recall one single, fleeting, smile-worthy moment. Even the festivities of wedding celebrations are comparatively staid.
Naturally, to cover some 60 years (it starts with the main character's grandfather in 1917) it must necessarily be episodic, but the jumps in time were not handled any more than perfunctorily.
I would single out for acting honours Satya Bhabha playing the main character, Saleem, as adult - but even moreso, Seema Biswas as the ayah harbouring her dreadful guilty secret.