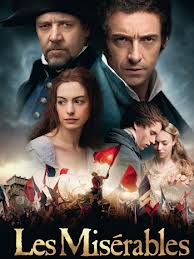 My favourite musical - and it's been a very long time since I felt such anticipation to see a film as I did for this. Already several of the bloggers I follow have written their own reviews and much has been said in the media so I won't re-tread familiar ground.
On my way to the cinema I was musing on the hope that, just perhaps, I might be scoring this film with a rare, exalted  '8' - or even an unheard of '8.5'.


I'll attempt a different approach in reviewing it by listing in order what I consider its positives and negatives:-

The cast - I thought all the men were good or very good (bar one) - and with Hugh Jackman being quite perfect. Even Russell Crowe I didn't think was anywhere near as poor as some have said. By now we all know that he doesn't have a singing voice and the strain in it was conspicuous for almost all the time, although his final song was very well performed.

All the actresses (bar one) were excellent. Much has rightly been said about Anne Hathaway, but I thought Samantha Barks as Eponine was outstanding.

The contributions from the choruses were uniformly impressive.

The new, specially composed song, 'Suddenly', even on this, my first hearing, struck me as pretty good. It slotted in seamlessly.

The sets were spectacular (but I was surprised that the film wasn't in wide-screen format).

Helena Bonham Carter (doing her slutty act yet again) who might as well have been singing in Czech as far as I was concerned. She seems to think that using a mike dispels any necessity to project. Her mixture of cod- cockney with a twist of caricature French lost most of her words to me, something I didn't find with the rest of the cast. Sacha Baron Cohen was better, but not by very much. I think both these were miscast - (both too young perhaps? - though one hardly demands authenticity, and in a musical of all things!) Sacha B.C. has shown that he can be very good, as he was in 'Sweeney Todd' , which was another film in which Helena B.C. once again mumbled and whispered her way through, paying scant attention to Sondheim's gloriously inventive lyrics. (Sacrilege!)

The whole 'Master of the House' sequence seemed a bit of a mess (too much cross-cutting?), providing nowhere near the uplift that it should as an 'oasis' amidst the ultra-seriousness of the rest of the show.

What the film gained in being opened up for the screen it seemed to lose in the taut excitement I experience in the theatre. In the latter it moved along with a keen, self-generated momentum whereas in this film it almost seems to have acquired excessive 'fat'. Not only did I look at my watch several times, I actually found myself yawning - at two separate moments!
There were a few points of high emotion where I thought the tear ducts might kick in, but the emotional intensity was not sustained for as long as it had been when watching the show live. I'd experienced more prolonged 'highs' when watching on film 'Mamma Mia' for the first time, as well as 'Chicago'. (It might be significant to mention that I've never seen these last two on the stage - though when watching these films I was aware of the songs that had been edited out.)


So, on the whole, a bit of a disappointment. Whereas I long to get the chance to see 'Les Mis' on stage for a fourth time, I don't think I'll be paying to see it in the cinema again, though when it comes on the telly I will be watching it then.