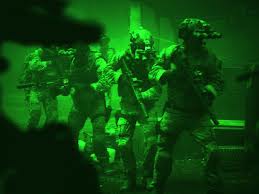 Just about everyone will know by now that this film concerns the hunt for, and 'elimination' of, Osama Bin Laden. Since it was released (only just now in the U.K. but weeks ago in a number of other countries) it has been garlanded with superlatives. Some have commented that certain scenes (nearly all towards the film's beginning) show that torture is effective in producing desired information, while some say that the film indicates the precise opposite. Then there have been criticisms from both left and right that it takes up a position sympathetic to the other side. I went with an open mind to both its purported political stance(s) and the validity or otherwise of applying torture (uneasy watching, predictably), but I really have no worthwhile comment to offer on these points, and it didn't hold back my appreciation.
.
I have no hesitation in saying that it is indeed a very good film - and yet, I didn't find it had quite the visceral impact which I felt when watching the recent 'Argo', which had gripped me throughout. I do wonder if I'd seen this one before the latter I'd be feeling that it was 'Argo' that was the slightly inferior film. Maybe, but I didn't, and can only recount my own reaction.
Difficult to pinpoint why I don't rate it a bit higher. No complaints about the acting, which was uniformly of a high standard, the construction of the film was taut enough, direction good, script was as fine as was demanded - but yet....... Maybe it was my mood this afternoon whereas I might have been more favourably disposed at another time.